Syed, who recently had his charges dropped, talked about his case and gave students insight on the work it takes to exonerate clients. 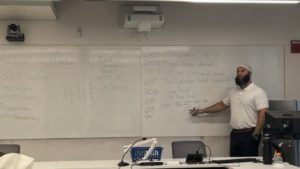 This is supposedly Syed’s first public appearance since his charges were dropped.

“Adnan Syed gave our students a master class in grace, courage, generosity, and kindness. He also broke down the entire procedural history of his case,” said Erica Suter, professor of Law at the University of Baltimore.

Suter, Syed’s lawyer and director of the Innocence Project Clinic, had a hand in Syed’s release dating back to September.

Syed has garnered multitudes of attention in the city of Baltimore since his sentence was vacated.

The case gained national attention when it was featured on the podcast Serial, which questioned some evidence used to convict Syed.

Syed’s charges were officially dropped in early October, with no new trial, making him officially free.

This story was originally published Oct. 20, 2022 by WMAR in Baltimore, an E.W. Scripps Company.