Wednesday, the attorney for Hae Min Lee’s family spoke out about the state’s decision. 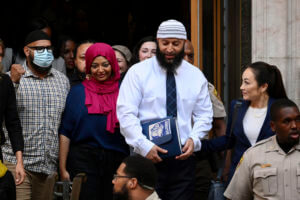 WMAR-2 News spoke with Steve Kelly who represents the Lee family and he discussed how they felt about the new findings.

He said the family is still processing everything related to the case now that it is a new active investigation dismissing Syed from criminal charges.

“They are processing you know, they feel just really confused, surprised. They don’t really understand what happened,” Kelly said.

Kelly said the heartbreak of the family losing Lee keeps wounding them, and to hear the state made a mistake while wrongfully convicting Syed for her death hurts even worse.

“Their confusion is that the state of Maryland has told them for 23 years that this is the killer, you know, and they believed it. They really just have a lot of questions that they want to get answered,” Kelly said.

“So it’s an open and pending case and, you know, as you all have noted, you know, this family, this poor family, I have so much empathy for them. They have for 23 years believed this was the individual that committed this heinous offense against their beautiful loved one and now they’re being told that, you know, evidence was withheld,” Mosby said.

Kelly said since it’s still early, they haven’t been able to physically view any of that evidence, and they just want to get to the bottom of this and to learn who killed their loved one.

“They want to know what evidence supported the decisions that were made in terms of the vacatur, vacating the conviction and then dismissing the charges. Their number one goal is to find a way move forward in peace. It’s not easy but that’s the hope anyway,” Kelly said.

Kelly also said more than anything the family felt like their voices were not heard in this dismissal process so they are hoping the state makes the right decisions and convicts the appropriate person or persons in this new investigation.

This story was originally published Oct. 12, 2022 by WMAR in Baltimore, an E.W. Scripps Company.