WEST PALM BEACH, Fla. (WPTV) — The mother of a newborn baby whose body was found floating in the Boynton Beach Inlet in 2018 is now facing a first-degree murder charge, but it took investigators more than four years to find her. 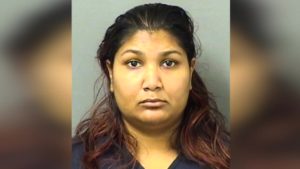 This booking photo provided by the Palm Beach County Sheriff’s Office shows Arya Singh, a woman accused of throwing her newborn daughter in the ocean in 2018. (PBCSO)

Arya Singh, 29, of Boynton Beach, was arrested Thursday after the Palm Beach County Sheriff’s Office forensic team used a pilot program to help detectives identify the father and, ultimately, mother of “Baby June,” whose naked body was discovered by an off-duty Boynton Beach firefighter on June 1, 2018.

Detective Brittany Christoffel told reporters that Singh had searched news stories on the internet about the baby’s discovery, and a probable cause affidavit released Friday detailed the frequency of her searches.

The following is an account of Google searches that Singh made later that evening: 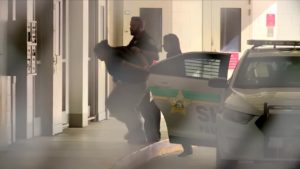 Arya Singh, identified as the mother of “Baby June,” arrives at the main Palm Beach County jail after her arrest on a charge of first-degree murder, Dec. 15, 2022, in West Palm Beach, Fla. (Eric Pasquarelli/WPTV)

According to the affidavit, Singh also found a YouTube video titled “Why is the Boynton Inlet so treacherous?” and a TripAdvisor.com page about the Boynton Beach Inlet, in addition to a pair of websites with live cameras of the inlet.

In the month after “Baby June” was found, Singh had searched 64 articles on local and national news websites.

Christoffel told reporters that detectives were able to collect a “covert DNA sample from her and confirm that she was the mother.”

According to the affidavit, detectives collected that DNA sample from a discarded coffee cup on Aug. 14.

The affidavit also revealed that “Baby June” died of asphyxia.

Singh appeared before a judge Friday morning and was ordered to be held without bond at the main Palm Beach County jail. Her next court date is scheduled for Jan. 17.

This story was originally published Dec. 16 by WPTV in West Palm Beach, an E.W. Scripps Company.