Kohberger, 28, is accused of murdering four University of Idaho students on Nov. 13, 2022. Kaylee Goncalves, Madison Mogen, Xana Kernodle and Ethan Chapin were stabbed to death as they slept, according to authorities.

Kohberger was taken into custody Dec. 30 at his family’s home in Chestnuthill Township, Pennsylvania.

According to an affidavit, investigators zeroed in on Kohberger as an suspect after identifying a white Hyundai Elantra. The vehicle was tracked around the crime scene and ultimately to Kohberger’s Washington-state residence. Over the course of the investigation, authorities mapped his movements all the way back to his family’s Pennsylvania home. The affidavit also notes that Kohberger’s Elantra had a Pennsylvania license plate prior to Nov. 18, when he registered the vehicle in Washington.

Investigators matched DNA from a knife sheath found at the crime scene to trash taken from the Kohberger residence in Pennsylvania, states the affidavit. 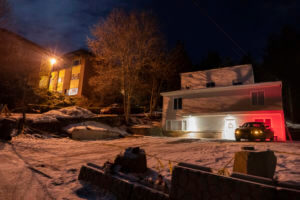 Another bombshell detail released in the affidavit is the statements of a surviving roommate, and an apparent eyewitness. The report states the roommate was “awoken at approximately 4:00 a.m. by what she stated sounded like Goncalves playing with her dog in one of the upstairs bedrooms.”

It continues, “She opened her door a second time when she heard what she thought was crying coming from Kernodle’s room. (She) then said she heard a male voice say something to the effect of, ‘It’s okay, I’m going to help.'”

The roommate then reportedly opened her door for a third time after hearing crying and saw “a figure clad in black clothing and a mask that covered the person’s mouth and nose walking towards her.” She described the figure as a “male, 5’10” or taller, not very muscular, but athletically built with bushy eyebrows. The man walked past her as she stood in a ‘frozen shock phase.'” The suspect then allegedly left the home and the roommate locked themselves in their room.

The affidavit also discusses tracking Kohberger’s cellphone activity. According to the report, investigators pinged Kohberger’s phone in the area of the crime scene at least twelve times between June 2022 and Nov. 13, 2022. In the hours surrounding the attack, his cellphone reportedly stopped reporting to the network at 2:47 a.m. and resumed at 4:48 a.m., states the affidavit.

Kohberger is charged with four counts of first-degree murder and one count of felony burglary.