CHICAGO (AP) — A jury’s guilty verdict that Jussie Smollett faked a racist and homophobic attack isn’t the end of legal proceedings for the former “Empire” actor or others.

Smollett, 39, was convicted Thursday of five counts of disorderly conduct for lying to Chicago police about being the victim of a racist, anti-gay attack near his home in downtown Chicago. He maintains his innocence, and his attorney has said he will appeal the verdict. 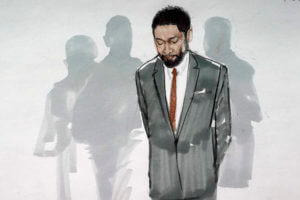 In this courtroom sketch, actor Jussie Smollett stands with his legal team in a Leighton Criminal Courthouse courtroom, Thursday, Dec. 9, 2021, in Chicago, after a jury found him guilty on five of six charges he staged a racist, anti-gay attack on himself and lied to police about it. (AP Photo/Cheryl Cook)

While the charges carry a possible sentence of three years in prison, legal experts have said Smollett is unlikely to get prison time for the low-level felonies, and is more likely to be sentenced to probation and ordered to perform community service. Judge James Linn didn’t set a sentencing date, but scheduled a Jan. 27 hearing for post-trial motions and said he would schedule sentencing after that.

Meanwhile, lawsuits that were on hold pending the outcome of the criminal case may now move forward. They include a lawsuit the city of Chicago filed against Smollett to recoup over $130,000 it spent investigating what police initially believed was a terrible hate crime.

Here’s a look at some remaining cases:

CITY OF CHICAGO VS. SMOLLETT

Chicago sued Smollett in April 2019, after he refused to pay $130,106.15 to reimburse the city for police overtime and other costs spent on the investigation.

The city demanded the payment shortly after the Cook County State’s Attorney’s office dropped the original charges against Smollett for lying to police about the attack. The move by State’s Attorney Kim Foxx infuriated then-Mayor Rahm Emanuel, who lashed out at Smollett for dragging the city’s reputation “through the mud” and wasting police resources on a hoax.

A federal judge stayed proceedings pending the outcome of the criminal case after a special prosecutor investigated and new charges were filed against Smollett in February 2020.

In April 2020, U.S. District Court Judge Virginia Kendall also dismissed a countersuit filed by Smollett against the city, former Chicago Police Superintendent Eddie Johnson, detectives on the case and two brothers who told police he recruited them for the fake attack.

His attorneys said Chicago couldn’t go after Smollett for the cost of the investigation because the city accepted his $10,000 bail as “payment in full in connection with the dismissal of the charges against him” when the original charges were dropped in 2019.

Smollett’s countersuit also said he was the victim of a malicious prosecution that caused him humiliation and extreme distress. They said Chicago police didn’t have probable cause to arrest him for lying based off of “unreliable” accounts from Abimbola and Olabingo Osundairo, the brothers who testified last week that Smollett paid them $3,500 to help him with the hoax, and because police didn’t pursue other evidence.

Kendall said in her ruling that Smollett could refile his suit if he was found not guilty in the criminal case.

In a statement after Thursday’s guilty verdict, the city’s law department said the decision “confirms that the City was correct” in suing Smollett.

“The City intends to continue to pursue its lawsuit to hold Smollett accountable for his unlawful actions and to demand that he compensate the City for costs incurred by the Chicago Police Department which took his false claims of harm seriously,” the statement read.

A status hearing is scheduled for Dec. 16 in U.S. District Court in Chicago.

The Osundairo brothers, who were star witnesses for the prosecution at Smollett’s trial, filed their own lawsuit in April 2019 accusing Smollett’s attorneys of defamation and seeking unspecified financial damages.

They claimed that the attorneys accused the brothers of leading “a criminally homophobic, racist and violent attack” against Smollett, destroying their personal and professional reputations. The lawsuit named as defendants celebrity attorney Mark Geragos, lawyer Tina Glandian and Geragos’ Los Angeles-based law firm.

The lawsuit also stated that Glandian made public statements that Abimbola Osundairo is gay and participated in sex acts with Smollett. Osundairo said that was untrue, and noted that he has family in Nigeria and travels often to the country, where homosexuality is illegal and punishable by years in prison or even death.

Osundairo said the lawyer’s statements put his life and the lives of his family in danger.

In a statement issued after the lawsuit was filed, Geragos and Glandian called it “ridiculous” and “a desperate attempt” by the brothers “to stay relevant and further profit from an attack they admit they perpetrated.”

A federal judge in Chicago put the case on hold until the completion of the Smollett trial and asked the parties to file a status report with the court by Feb. 1, 2022.