DAVENPORT, Iowa (AP) — An agent who oversaw the 2018 investigation into the disappearance of a University of Iowa student testified Monday that a shortage of Spanish-speaking officers delayed and hindered his ability to question the man on trial in her stabbing death.

Division of Criminal Investigation agent Trent Vileta said he wanted to speak with Cristhian Bahena Rivera after investigators linked him to a car seen on video driving near where Mollie Tibbetts disappeared while running in Brooklyn, Iowa.

But that took four days, in part because investigators knew they needed to question Bahena Rivera and his co-workers in Spanish, and “we didn’t have any Spanish speakers,” Vileta said.

Vileta testified at the Scott County Courthouse in Davenport as the first-degree murder trial of Bahena Rivera entered its second week. Bahena Rivera, 26, faces life in prison if convicted.

Prosecutors say Bahena Rivera followed Tibbetts while she ran on July 18, 2018, killed her after she threatened to call police then hid her body in a cornfield. They say Bahena Rivera led investigators to the body after making a partial confession on Aug. 20, 2018, and that Tibbetts’ DNA was a match for blood found in his trunk.

Vileta acknowledged Monday that investigators never found a murder weapon and do not have physical evidence proving Bahena Rivera killed her, only that her body was in his vehicle’s trunk. Bahena Rivera told police that he “blacked out” and couldn’t remember how he killed Tibbetts.

Vileta said the evidence suggests Tibbetts was abducted on a road outside Brooklyn around 8 p.m., but that he does not know precisely where or when she was killed.

Data from Tibbetts’ cellphone provider shows her phone was moving at a running pace before accelerating to over 60 mph and eventually slowing down and stopping several miles away, FBI agent Kevin Horan testified.

Agents narrowed their focus to that rural area, where her body was later found. Her cellphone and FitBit device were never recovered, Vileta said.

Tibbetts suffered up to 12 wounds to her head, neck, chest and other body parts, including one injury that penetrated her skull, he said. An injury to her right hand suggested she was trying to defend herself. 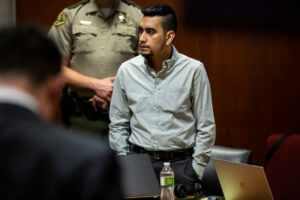 Cristhian Bahena Rivera stands as the jury leaves the room for a break during his trial, on Monday, May 24, 2021, in the Scott County Courthouse, in Davenport, Iowa. Bahena Rivera is on trial after being charged with first degree murder in the death of Mollie Tibbetts in July 2018. (Pool Photo/Kelsey Kremer/Des Moines Register)

Bahena Rivera remained largely expressionless throughout the day. He watched as the medical examiner discussed several photos showing the wounds to Tibbetts’ body, which had decomposed by the time it was recovered.

After identifying Bahena Rivera as a person of interest Aug. 16, Vileta said he had to find Spanish-speaking officers to question the Mexican national and other dairy farm workers, describing that four-day gap as “a nervous time.”

Vileta noted that the “ political environment ” for immigrants living illegally in the U.S. was hostile in 2018, and said he worried that Bahena Rivera or others might flee if they knew they were being sought for questioning. That’s why investigators took DNA samples from Hispanic workers at the farm, so they could be identified if they later disappeared, he said.

Vileta said he asked Iowa City police officer Pamela Romero to question Rivera because she is fluent in Spanish, even though she had little interrogation experience.

He said he opted not to have Romero translate his questions for Bahena Rivera because doing so would make for a choppy and frustrating discussion, and had Romero continue the interview because Bahena Rivera seemed comfortable speaking with her.

Vileta said he and an FBI agent tried to manage the 11-hour interview by taking frequent breaks so they could be briefed on Bahena Rivera’s statements, but that it was difficult.

On cross-examination, Vileta recounted looking into Mollie Tibbetts’ boyfriend and other men who came under scrutiny for various reasons before Bahena Rivera came on their radar. That included a reserve deputy who lived on the property adjacent to where Tibbetts’ body was found, Vileta said.

Tipsters told police that the man had a “torture room” in his basement and had previously harmed women and children, Vileta acknowledged. Investigators went to the man’s house, did not find such a room and never formally interviewed him, he said.

Seeking to rebut suggestions that someone else could have been responsible for Tibbetts’ death, prosecutor Scott Brown raised his voice to a shout as he asked Vileta whether anyone else had confessed or been linked to the death of Tibbetts by blood evidence. Vileta said only Rivera.

“That person is the man seated here to my right, would you agree?” Brown said, pointing at Bahena Rivera.