The man convicted of killing Mollie Tibbetts — in a trial Court TV carried gavel-to-gavel — is scheduled to be sentenced Monday, August 30, starting at 2:30/3:30c.

After a two-week trial, a jury found Cristhian Bahena Rivera guilty of the 20-year-old University of Iowa 2018 student’s stabbing death. Tibbetts’ body was discovered in a cornfield in a rural area near Brooklyn, Iowa.

Bahena Rivera maintains his innocence and claims he was ambushed by two masked men who abducted Tibbetts while she was jogging and placed her in the trunk of his car. He admitted hiding her body in the cornfield where her remains were discovered, but denied killing her. 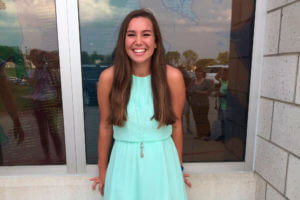 FILE – In this September 2016 file photo provided by Kim Calderwood, Mollie Tibbetts poses for a picture during homecoming festivities at BGM High School in her hometown of Brooklyn, Iowa.  (Kim Calderwood via AP, File)

After the trial, Bahena Rivera’s lawyers claimed to have new evidence that Tibbetts’ kidnapping was linked to a sex trafficking ring. Prosecutors, however, argued that the defense had its chance to use that information and declined to pursue it sooner.

With the verdict hanging in the balance, the judge heard testimony from Arnie Maki, who testified that another inmate, Gavin Jones, confessed to killing Tibbetts.

Ultimately, the judge denied the defense’s motion for a new trial, finding that the alleged confession of Jones would not have changed the outcome of the trial. He also noted Jones’ version of events, as told to Maki, contradicted Bahena Rivera’s account of what happened.

Tibbetts’ family fill have a chance to address the judge before he sentences Rivera. Since Iowa abolished the death penalty, state law only allows one option: Life in prison without the possibility of parole.