Alec Baldwin is asking a federal judge to dismiss a defamation lawsuit filed by a Wyoming woman who said she received hateful social media messages after the actor shared on social media a photo she posted of demonstrators at former President Donald Trump’s rally in January 2021 and made a political comment.

“Reposting a photo Roice (McCollum) herself publicly posted and then expressing a political opinion about it cannot be the basis for an intentional infliction claim,” Baldwin’s attorneys argued Monday. 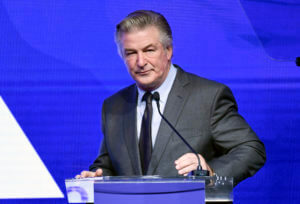 FILE – Alec Baldwin performs emcee duties at the Robert F. Kennedy Human Rights Ripple of Hope Award Gala at New York Hilton Midtown on Dec. 9, 2021, in New York. The widow and two sisters of a U.S. Marine killed in Afghanistan are suing Baldwin, alleging he exposed them to a flood of social media hatred and insults by claiming on Instagram that one sister was an “insurrectionist” for participating in the Jan. 6, 2021, demonstration in support of former President Donald Trump in Washington, D.C. The sister protested peacefully and legally and was not among those who stormed the U.S. Capitol that day, according to the lawsuit filed Monday, Jan. 17, 2022 in U.S. District Court in Cheyenne. (Photo by Evan Agostini/Invision/AP, File)

The lawsuit was filed in January by Roice McCollum whose brother was killed by a suicide bomber at the airport in Kabul, Afghanistan, in August 2021.

After learning of the death of Marine Lance Cpl. Rylee McCollum of Wyoming, and the expected birth of his daughter, Baldwin reached out to Roice McCollum via Instagram and donated $5,000 to the family.

In January, Baldwin saw that Roice McCollum had posted on Instagram a picture of demonstrators from former President Donald Trump’s rally at the Washington Monument taken on Jan. 6, 2021.

Baldwin sent her a private message asking if she was the one who had organized the fundraiser. She confirmed she was the same woman and that she had been at the protest which she called “perfectly legal,” according to court documents.

Baldwin told Roice McCollum he’d shared her photo with his 2.4 million Instagram followers and wrote: “Good luck,” according to the lawsuit. 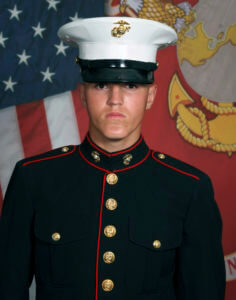 FILE – In this undated photo released by the 1st Marine Division, Camp Pendleton/U.S. Marines is Marine Corps Lance Cpl. Rylee J. McCollum, 20, who was among 13 U.S. soldiers killed in a suicide bombing Aug. 26, 2021, at the Kabul airport. The widow and two sisters of McCollum are suing actor Alec Baldwin, alleging he exposed them to a flood of social media hatred and insults by claiming on Instagram that one sister was an “insurrectionist” for participating in the Jan. 6, 2021, demonstration in support of former President Donald Trump in Washington, D.C. The sister protested peacefully and legally and was not among those who stormed the U.S. Capitol that day, according to the lawsuit filed Monday, Jan. 17, 2022 in U.S. District Court in Cheyenne. (U.S. Marines via AP, File)

Roice McCollum said she received hundreds of hateful messages including one telling her to “get raped and die,” and that her brother “got what he deserved,” according to the lawsuit, which was filed in Wyoming.

The complaint, which also names Cheyenne McCollum and Rylee’s wife, Jiennah McCollum, as plaintiffs, said they were defamed following the online dispute. They are seeking $25 million in damages.

Baldwin’s response lists several reasons the lawsuit should be dismissed, including arguing the court does not have jurisdiction over Baldwin because he does not live in Wyoming, that private communications between himself and Roice cannot be defamatory and that Cheyenne and Jiennah’s claims should be dismissed because Baldwin didn’t make any statements about them.

Baldwin “was struck by the irony that his tribute to a fallen Marine, a patriot, was coordinated by an individual who participated in an event that — in Baldwin’s and many other people’s opinion — was an assault on the core of American democracy,” his response said.

“The real irony here is that Roice is suing Baldwin for expressing his widely supported opinion about January 6, when Roice had written to him moments before that her participation at January 6 — an event that promoted the false assertion that the 2020 election was stolen — constitutes the ‘freedom of protest,’ ” the response said.