FORT LAUDERDALE, Fla. (AP) — Jury selection in the penalty trial of Florida school shooter Nikolas Cruz is on track to begin April 4, the judge said Friday during a status conference with the lawyers.

Circuit Judge Elizabeth Scherer also set aside full days on March 30 and 31 to address any issues either side might have before the jury selection begins. The hearings will take place in the courtroom where the trial will take place so attorneys can become familiar with the technology being used during the trial.

“We have a very good organizational plan, and most of the issues have been addressed,” Scherer said. “That’s a very good start.”

Cruz, now 23, pleaded guilty in October to 17 counts of first-degree murder and 17 counts of attempted murder. But a jury must still decide whether he will be executed or receive a life sentence without parole. The penalty trial is expected to last at least two months.

Scherer and attorneys from the defense and prosecution discussed how jurors will be selected and what the judge will say as they try to determine whether members of the jury pool can be fair and impartial.

They set jury selection to begin on April 4 and continue through April 6, with April 7 and 8 set aside for the completion of any depositions of the numerous possible witnesses.

It was Valentine’s Day in 2018 when Cruz opened fire on the Marjory Stoneman Douglas High School campus in Parkland, Florida, killing 14 students and three staff members. The shooting also injured 17 others.

The trial was originally scheduled to start in 2020, but it was delayed numerous times during the coronavirus pandemic. Last month, prosecutors told the judge they needed more time to depose dozens of defense witnesses. 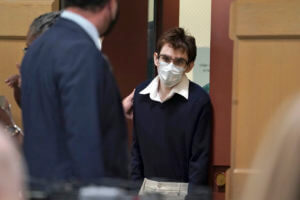 Under Florida law, prosecutors and defense attorneys are allowed to interview the other side’s witnesses before trial so they know what they are expected to say and can prepare their cross-examination.

During the trial, jurors will be seeing evidence that would have been introduced had there been a trial.

Earlier this week, the U.S. Department of Justice confirmed a $127.5 million settlement with victims’ families over the FBI’s failure to investigate a tip it received about a month before the Parkland massacre.