ATLANTA (AP) — A former Atlanta attorney convicted of arranging the slaying of his wife in 1992 has died in prison, according to his lawyer.

Fred Tokars, 67, died of natural causes over the weekend while incarcerated in Pennsylvania, his attorney, Jerry Froelich, confirmed to news outlets this week.

Fred Tokars had suffered from a number of health issues for more than a decade, according to Froelich. An autopsy was pending, news outlets reported. 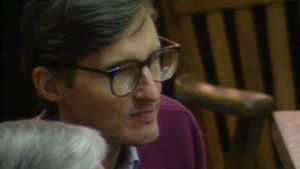 Court TV Archives – Fredric Tokars was charged with hiring a hit man to murder his wife. Prosecutors said that Mr. Tokars, former Atlanta prosecutor, had his wife killed to prevent her from telling anyone about his massive drug trafficking and money–laundering operation. Tokars was convicted of first-degree murder and was sentenced to life in prison in 1997.

The former prosecutor was sentenced to life without parole in 1994 on federal racketeering charges and later convicted of murdering wife Sara Tokars. He avoided the death penalty.

Sara Tokars and her sons, then 4 and 6, were kidnapped Nov. 29, 1992, after returning home from a Thanksgiving trip. The boys were in the back seat of their car when she was killed in the vehicle with a shotgun blast to the back of the head.

Prosecutors alleged during the court proceedings that Fred Tokars enlisted a business associate as a middle man to set up the hit because he feared his wife would expose his scheme to help drug dealers establish bank accounts and launder money.

Fred Tokars later spent years testifying in murder trials against fellow inmates, news outlets reported. He was being held in secret custody and was unlisted in the federal prison system, The Atlanta Journal-Constitution said.