FORT LAUDERDALE, Fla. (AP) — The birth mother of Florida school shooter Nikolas Cruz abused crack cocaine and alcohol during her pregnancy, his half-sister and another witness testified Monday — a circumstance that his lead attorney said left him with “an irretrievably broken” brain and set him on the road to mass murder.

Cruz’s attorneys began their defense Monday, hoping to convince his jury to sentence him to life without parole instead of death for slaying 14 students and three staff members during the Feb. 14, 2018, shooting at Parkland’s Marjory Stoneman Douglas High School.

His lead attorney, Melisa McNeill, told the jury during her deferred opening statement that Cruz has fetal alcohol and drug issues that weren’t dealt with adequately by his adoptive mother, Lynda Cruz, who suffered from severe depression and financial woes after her husband died suddenly when their son was 5. McNeill told the jury that doesn’t excuse what her 23-year-old client did, but are factors they should consider as her team presents its case over several weeks.

“He is a brain-damaged human,” she said.

She said nothing in Cruz’s life story will erase that the seven men, five women and 10 alternates have “seen things that will haunt us forever.” Cruz pleaded guilty in October to 17 counts of first-degree murder and the trial will only decide his sentence.

McNeill deferred her opening statement from the trial’s first day of July 18 to the beginning of her team’s case. For Cruz to be sentenced to death, the jury must be unanimous — if even one juror votes for life, that will be his sentence. 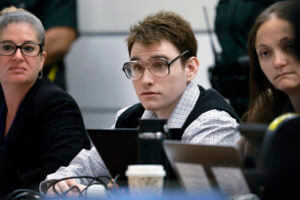 The defense is seeking to overcome horrendous evidence laid out by lead prosecutor Mike Satz and his team, capped by the jurors’ visit to the fenced-off building that Cruz stalked, firing about 150 shots down halls and into classrooms. Jurors saw dried blood on floors and walls, bullet holes in doors and windows and remnants of Valentine’s Day cards and balloons.

The defense began its case by showing that Cruz’s late birth mother, Brenda Woodard, was a Fort Lauderdale prostitute who smoked crack cocaine and drank Colt 45 malt liquor and Cisco fortified wine during her pregnancy with him. It is unknown whether Cruz’s birth father was a customer or a rapist — there was conflicting testimony on that — but his identity is unknown and he was not part of Woodard’s life.

Cruz spent much of the day looking up at the proceedings — during the prosecution’s case, he usually stared at the defense table and scribbled on a pad.

Carolyn Deakins, a former prostitute, testified Monday that she and Woodard were drinking beer one day in 1998 when Woodard got sick. She thought it was because of drugs, but Woodard told her she was pregnant. Deakins said she angrily told Woodard she was harming her baby with drugs and drinking, but Woodard replied she was putting the child up for adoption and didn’t care. 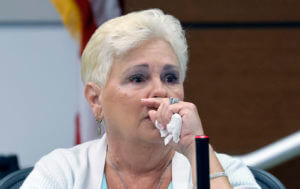 Carolyn Deakins becomes emotional as she testifies about her drug and alcohol use in the 1990’s with Brenda Woodard, the biological mother of Marjory Stoneman Douglas High School shooter Nikolas Cruz, during the penalty phase of Cruz’s trial at the Broward County Courthouse in Fort Lauderdale on Monday, Aug. 22, 2022. Cruz previously plead guilty to all 17 counts of premeditated murder and 17 counts of attempted murder in the 2018 shootings. (Amy Beth Bennett/South Florida Sun Sentinel via AP, Pool)

“Nickolas, I am sorry, but that’s how it was,” she said, peering over at the defense table. Cruz looked down.

Cruz’s half-sister, Danielle Woodard, nearly 12 years older, was brought to the courtroom from a Miami-Dade County jail where she is awaiting trial on a carjacking charge. Monday was the first time she had seen Cruz in person since she held him minutes after his birth — “he was really squirmy.” Their mother kicked her out of the maternity ward for asking if they could keep him.

She confirmed that throughout her childhood her mother abused alcohol and drugs. She said her mother would beat drug screens while on probation by having her urinate into a container and hide it in her person. The behavior continued through another pregnancy that birthed hers and Cruz’s half-brother, Zachary.

“She had an addiction. She always put that first,” Woodard said. Cruz nodded after she said she still loved her brothers.

Susan Lubar, a former Broward County teacher of preschool special needs, testified that Cruz had severe language and behavioral problems when she taught him at age 4. She said he would act like a tiger, curling his hands like paws and hissing at other children if they got too close.

“Nikolas would push children, scratch at them, topple over furniture, he would stay away from other children and if they got too close, he would pounce,” she testified.

To calm him, she put a sheet over a table where he would go to be alone with toys and picture books, something she never did with any child since in her long career.

Other children “knew that was his space and wouldn’t try to go in there,” she said.