DETROIT (WXYZ) — On Wednesday, Attorney Ven Johnson told Oakland County Circuit Court Judge Rae Lee Chabot that he viewed surveillance footage from the Nov. 30 Oxford school shooting, and while the video is graphic, releasing it to him, he says, won’t violate students privacy.

“Protecting the students who are, of course, under 18 they had masks on, judge,” Johnson said as he spoke to before the judge asking for the video to be released to him.

The video has been held by law enforcement and school officials who have not yet released it citing privacy concerns.

Ven Johnson represents the family of one of four students killed and other family’s of injured students.

The accused, 16-year-old Ethan Crumbley is charged with murder and terrorism in the case.

Johnson says Ethan is seen on the graphic video wearing a mask, but also using a gun.

That gun and his backpack were found on the scene inside a bathroom.

The attorney also says there were two employees they didn’t know about in the video who he says could have intervened.

“Who we believe may have played a role in ultimately not doing their job that day and preventing the shooting that was already occurring. When if they’d done their job it could have been prevented,” said Ven Johnson, attorney suing on behalf of parents.

The shooting has already raised serious issues about the shooting and if it could have been prevented.

In a drawing made by Ethan Crumbley the morning of the shooting he stated, “My life is useless, the thoughts won’t stop, blood everywhere.”

Ethan was questioned by a school counselor about being suicidal, but returned to class when his parents refused to take him home.

His parents are charged with involuntary manslaughter for their actions including buying Ethan the gun as a Christmas present. 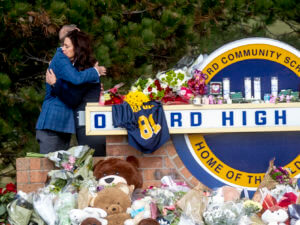 Attorney Johnson did not say what specifically he saw on the video with two more employees.

“How about the fact that my clients after eight months of going through this tragedy had no idea that these people were even involved?,” Johnson said.

In court, the attorney for Oxford Schools argued this civil lawsuit, the only one filed in state court should be put on hold until the issue of governmental immunity is taken up by the Court of Appeals and the State Supreme Court, months down the road.

This judge, said no.

“I am not going to specifically stay discovery,” said Judge Rae lee Chabot, Oakland County Circuit Court in response to the district’s request for a stay.

This high-profile case could cause this bigger legal battle to get new attention by lawmakers and stakeholders around the state.

“We believe in protecting the guilty and protecting government employees simply because they worked for our government and we’re there to serve us and our taxpayer dollars should not get special treatment and be above the law,” Johnson said.

The attorney for Oxford Schools did not comment outside of court.

Attorney Johnson says there will be a protective order with the video keeping it from being made public.

But, he says he’ll have it soon.

This story was originally published July 27 by WXYZ in Detroit, an E.W. Scripps Company.