SAN JOSE, Calif. (AP) — A federal judge rejected a bid for a new trial for disgraced Theranos CEO Elizabeth Holmes after concluding a key prosecution witness’s recent remorseful attempt to contact her wasn’t enough to award her another chance to avoid a potential prison sentence for defrauding investors at her blood-testing company. 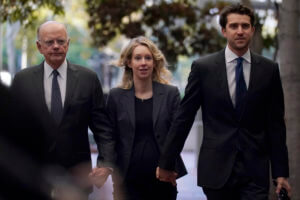 The ruling issued late Monday by U.S. District Judge Edward Davila is the latest setback for Holmes, a former Silicon Valley star who once boasted an estimated net worth of $4.5 billion but is now facing up to 20 years prison that would separate her from her 1-year-old son.

In the latest twist in a Silicon Valley soap opera, Holmes appeared to be pregnant when she showed up for an Oct. 17 hearing about her request for a new trial. That hearing focused on remorseful remarks made in August by former Theranos lab director Adam Rosendorff, a pivotal witness who testified about Holmes’ skullduggery during her trial last year.

Besides rejecting Holmes’ claim that a 10-minute visit Rosendorff made to her Silicon Valley home in August raised questions about misconduct at her trial, Davila also rebuffed two other motions for another trial in his 15-page ruling. One motion revolved around a description prosecutors made about her former lover and business partner, Rawesh “Sunny” Balwani, during closing arguments. The other motion focused on a dispute over whether the government withheld evidence pertaining to a Theranos database containing results of its blood tests.

Davila has scheduled Nov. 18 as the day he will sentence Holmes, 38, for four felony counts of investor fraud and engaging in a conspiracy with Balwani. Earlier Monday, Davila postponed Balwani’s sentencing for his conviction on 12 counts of investor and patient fraud from Nov. 15 to Dec. 7..

Holmes is facing up to 20 years in prison – a stunning reversal of fortune for a once-ballyhooed entrepreneur who appeared on the covers of magazines and on stage with luminaries such as former President Bill Clinton. She was initially lionized as a visionary for a Theranos technology that she pledged could scan for hundreds of diseases and other potential problems with a few drops of blood. After explosive series of articles exposed serious flaws with Theranos tests that were jeopardizing patients, Holmes as as a greedy charlatan who brazenly lied to investors while raising nearly $1 billion.

Following a jury’s conviction of her in January, Holmes’ legal team first tried to persuade Davila to throw out the verdicts as irrational. When that effort failed, Holmes lawyers last month filed a motion seeking a new trial, based on an uninvited visit that Rosendorff made to a palatial estate she shares with her current romantic partner, William “Billy” Evans, who also is the father of the son she had a few months before her trial began. 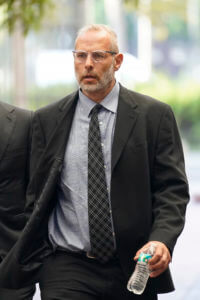 In court documents, Evans said an emotionally distraught Rosendorff confided that during his trial testimony that “he tried to answer the questions honestly but that the prosecutors tried to make everyone look bad” and felt “he had done something wrong.”

That was enough for Davila to postpone Holmes’ original Oct. 17 sentencing date to summon Rosendorff back to court three weeks ago. When he took the stand again, Rosendorff confirmed that he made the visit, but only as part of an effort to gain closure for a traumatic period in his life. He also said he felt bad about his role in separating a child from his mother for a potentially extended time, but emphasized he stood by all his trial testimony and added he believed it was time for Holmes “to pay her debt to society.”

“The court finds Dr. Rosendorff’s statements under oath to be credible,” Davila concluded in his ruling.

In his latest court appearance, Rosendorff also said he believed Holmes is pregnant again – an observation echoed by numerous other people who saw her that day. When asked by The Associated Press after the hearing if she was pregnant, Holmes didn’t respond but smiled warmly. Evans didn’t answer the question, either.