BIRMINGHAM, Ala. (AP) — A Birmingham police detective was arrested early Saturday on suspicion of shooting and killing a woman in a slaying the police chief described as a “love triangle gone wrong.” 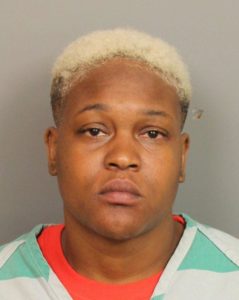 Fuller was in the vehicle with an off-duty Birmingham police detective, police said. The male detective was not injured.

“This is not a press conference that I wanted to give today or any other day, but it’s about the facts and the realities of life,″ Police Chief Patrick Smith said Saturday. “It’s a press conference about a love triangle gone wrong, something that happened very bad this morning.”

Smith said he didn’t know the exact relationship between the two officers and the slain woman.

“It’s something that’s been going on for a little while,’’ he said, “but without our knowledge.”

Fluker, who was also off-duty at the time of the shooting, has been with the department for 15 years and was assigned to a crime reduction unit.

Investigators presented the case to the Jefferson County District Attorney’s Office for review, and a capital murder warrant was obtained against Fluker, police said.

She was being held without bond in the Jefferson County Jail. Birmingham police spokeswoman Ariana Garza said she didn’t know whether Fluker had an attorney.