STOUGHTON, Mass. (AP) — A woman who is accused of striking her Boston police officer boyfriend with her car outside a suburban home, leaving the area and then returning hours later to find him lying in the snow, pleaded not guilty to manslaughter and other charges at her arraignment Wednesday.

Karen Read, 41, of Mansfield, is also charged with leaving the scene of a motor vehicle collision causing death and motor vehicle homicide in the death of Officer John O’Keefe, 46, during Saturday’s nor’easter. She was released on $50,000 bail. 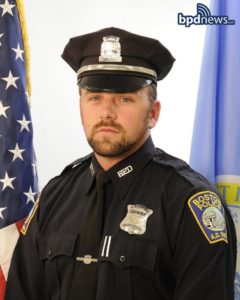 This undated photograph provided by the Boston Police Department shows officer John O’Keefe, 46, of Canton, Mass. O’Keefe died at an area hospital after being found lying in snow unresponsive outside his home on Saturday Jan. 30, 2022. Karen Read, 41, of Mansfield, Mass., was charged with manslaughter on Wednesday Feb. 2, 2022 after allegedly striking O’Keefe, her boyfriend, with her car. Read pleaded not guilty to manslaughter and other charges at her arraignment Wednesday. (Boston Police Department)

O’Keefe, 16-year veteran of the Boston police, was found unresponsive outside a Canton home at about 6 a.m. Saturday. He was taken to the hospital where he was pronounced dead hours later.

According to the prosecutor in Stoughton District Court, the couple had been to two bars and were heading to an after-hours party at the home. Read said she did not feel well and decided not to attend. O’Keefe got out of the vehicle, and while making a three-point turn, Read struck him, then drove away, the prosecutor alleged.

She became frantic hours later when she could not contact him so she went back to the home, where she and two friends found O’Keefe. He died of head trauma and hypothermia, the prosecutor said.

Her attorney said his client is distraught. The district attorney’s office made a rush to judgment based on political pressure because a police officer died, David Yannetti said outside court.

“My client has no criminal intent. She loved this man. She is devastated. She is innocent, and that will come out at trial,” he said.

The Boston Police Department is “stunned and saddened” by O’Keefe’s death, Superintendent in Chief Gregory Long said in a statement.

“The Boston Police Department continues to grieve over the tragic loss of our brother police Officer John O’Keefe. John was a kind person, dedicated to his family, and will be greatly missed by his coworkers and anyone who had the privilege of meeting him.”