FORT LAUDERDALE, Fla. (AP) — A slow slog of jury selection began Tuesday in the trial of the suspect in 2018’s Florida high school massacre on charges that he attacked a jail guard nine months after the shooting.

Prospective jurors were ushered into the courtroom in groups of 32 and asked basic questions about their knowledge of Nikolas Cruz, the shooting at Marjory Stoneman Douglas High in Parkland that left 17 dead, whether they could put that aside and their availability to serve. Those who pass this initial screening will be brought back on Oct. 18 for further questioning.

About 10 people in Tuesday’s first group raised a hand when Circuit Judge Elizabeth Scherer asked if they could not be fair to Cruz in this case, given what they know of the shooting. Several others said it would be a financial burden to serve. About 15 of that initial group will be brought back. 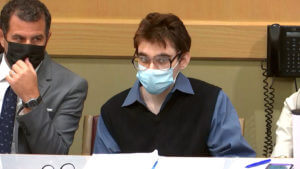 This image from video shows Parkland shooting suspect Nikolas Cruz as he sits in court on Oct. 5, 2021. Jury selection began today in Cruz’s jail brawl trial, in which he’s accused of attacking a guard nine months after his arrest. (Court TV)

Cruz, 23, brawled with a Broward County jail guard, Sgt. Raymond Beltran, while incarcerated on charges that he murdered 14 students and three staff members on Feb. 14, 2018. No date has been set for the murder trial, which has been delayed by the pandemic and arguments over witnesses and evidence. It may start in the next few months.

Jury selection in a typical jail brawl trial would take a few hours, with lawyers picking jurors and an alternate or two from a pool of 22. Given Cruz’s notoriety, lawyers in this case are scheduled to take up to five days to pick from a pool of more than 500. Testimony is expected to last one or two days, beginning Oct. 19.

In an unusual move Tuesday, the judge, at the request of Cruz’s attorneys, told prospective jurors that he is jailed in connection with the school shooting. In trials involving crimes in jail, jurors are typically not why a defendant is incarcerated, because it is irrelevant to what is charged and could prejudice the verdict.

But Cruz’s attorneys plan to question the prospects about their knowledge of the shooting to make sure they can evaluate the battery case solely on that evidence. His attorneys wanted Scherer to go even further and tell the prospective jurors the number of victims killed, but she refused, saying that was too inflammatory.

Scherer put Cruz under oath and asked if he is in agreement with his attorneys’ request. He softly answered “yes” to her first question and nodded in agreement to the others.

Beltran and Cruz fought on Nov. 13, 2018, with a soundless security camera recording the brawl. Beltran was overseeing Cruz during his recreation period when they suddenly began to argue. Cruz flipped both middle fingers at Beltran and then charged him, starting a minute-long brawl that ended after Beltran staggered him with a blow to the head.

Beltran told investigators that Cruz attacked him after he asked him to stop dragging his feet and damaging his sandals. Cruz’s attorneys are expected to argue that Beltran had a history of mistreating Cruz and verbally instigated the fight.

Cruz faces a possible 15-year sentence if convicted of attempted criminal battery on a law enforcement officer and three lesser charges. Cruz will get either death or life in prison without parole if he is later found guilty of first-degree murder, but this trial still has relevance. If Cruz is convicted of attacking Beltran, prosecutors can argue that is an aggravating factor when they seek his execution during the penalty phase of his murder trial if convicted.