LOS ANGELES (AP) — A new attorney has been appointed to represent Britney Spears in her conservatorship after a hearing in which the singer tearfully spoke about the case’s impact on her life. 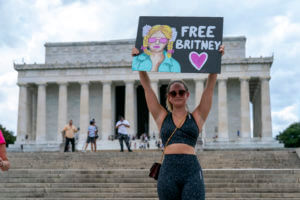 Maggie Howell supporter of pop star Britney Spears protests at the Lincoln Memorial, during the “Free Britney” rally, Wednesday, July 14, 2021, in Washington. Rallies have been taking place across the country since the pop star spoke out against her conservatorship in court last month. (AP Photo/Jose Luis Magana)

Rosengart requested that Spears’ father, James, be removed as her conservator, but that was rejected.

Spears spoke for the second hearing in a row, at one point calling the acts of the conservatorship that has governed her personal and financial affairs since early 2008 “cruelty.”

She asked that the case end immediately, but not if she has to go through more “stupid” evaluations.

Spears spoke rapidly while addressing the court, breaking down in tears toward the end of her remarks.

The hearing came three weeks after Spears dramatically addressed the court for the first time in open session, telling Penny she was being forced to take medication and use an intrauterine device for birth control, said she was not allowed to marry her boyfriend, and said she wanted to own her own money.

Spears’ remarks led to the resignation of her court-appointed lawyer, the withdrawal of an estate-management company that was supposed to oversee her finances, and a volley of accusations between her father and a professional conservator over who’s to blame for the legal circumstances Spears said are “abusive” and need to end.

Spears supporters amassed outside the Los Angeles courthouse where the hearing was held, as they have during recent hearings. Florida congressman Matt Gaetz made a brief appearance addressing the crowd.

“Well, now the whole world knows what Britney Spears wants, and it is the freedom and the liberty that should be offered to every single American. Free Britney!” he shouted.

In Washington, D.C., a group of Spears supporters demonstrated on the National Mall in support of the singer.

Spears has been under court supervision, with her father and a team of attorneys controlling her life and finances, since February 2008. She was in the midst of a public meltdown at the time and her family sought the conservatorship for her protection.

The case had for several years operated with little drama, though in recent years questions about how long it had gone on, and the singer’s feelings about the case, started. That has culminated in recent months into intense public scrutiny of the court proceedings, which have been conducted largely in secret due to medical and private information about the singer and her condition.

There’s also been focus on the complex network of lawyers and others involved in the conservatorship.

James Spears said in a legal filing that the court needs to investigate the allegations and Montgomery’s role, pointing out that his daughter’s personal life has been beyond his control since he resigned as conservator of her person in 2019, a role he played for 11 years. He opposed Montgomery’s request for money to hire security because of recent death threats, saying he has been subjected to similar threats for years.

Montgomery said she is committed to staying on the job and is putting a care plan in place to help end the conservatorship, something she said James Spears has expressed no desire to do.

Despite nearly two years on the job, Montgomery’s status is still technically temporary. She appeared to be on track for permanent appointment before recent events.

The Bessemer Trust, a financial company that Spears had sought as a replacement for her father last year but was instead appointed to work alongside him, also withdrew from the conservatorship last week, saying it no longer wanted to take part in a legal arrangement that the singer didn’t want.