VISTA, Calif. (Court TV) — A California interior designer has been found guilty of murdering her former stepfather after finding stolen nude photos of herself on his computer.

Jade Sahsa Janks, 39, was convicted of first-degree murder on Dec. 21. Sentencing has been scheduled for April 3.

Prosecutors contend that on New Year’s Eve 2020, Janks drugged, strangled and suffocated 64-year-old Thomas Merriman with a plastic bag after she found out her ex-stepfather was using a stolen nude photo of her as his computer background.

Merriman, 64, co-founded Butterfly Farms, a research and education non-profit dedicated to the conservation of butterflies. His body was found outside his Solana Beach home hidden under a pile of trash on January 2, 2021.

The discovery of the image enraged Janks and prompted her to plot his murder, argued prosecutors at trial. They said that in the following days, she contacted an old friend and asked for help killing Merriam.

According to court filings, prosecutors stated that a friend of Janks by the name of Adam Siplyak reported to law enforcement that Janks admitted to him on January 1, 2021 that she’d killed her former stepfather and had asked him to help stage the murder to appear as if Merriman had overdosed. 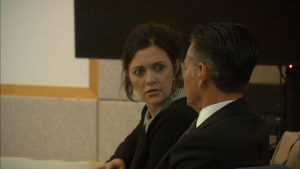 Jade Janks reacts as the jury’s verdict is read Wednesday, Dec. 21, 2022 in Vista, Calif. The jury found Janks guilty of murdering her stepfather, Thomas Merriman, after discovering nude photos of herself on his computer. (Court TV)

Janks’ defense team claimed their client loved her former stepfather, and helped care for him despite her mother having divorced him years ago. They contended Merriman died at his own hands — by taking a fatal dose of prescription pills.

San Diego County forensic pathologist Greg Pizarro determined that Merriman’s cause of death was acute zoldipem intoxication. Zoldipem is more commonly know by its brand name, Ambien. Pizarro noted that the levels of zoldipem in Merriman’s bloodstream fell within the range of a lethal dose.

Investigators said that on December 31, 2020, Janks picked Merriman up from the hospital, where he had been undergoing treatment. In the hours after, prosecutors claimed she texted several friends, allegedly messaging one “I just dosed the hell out of him.”

Janks pleaded not guilty to the Merriman’s murder. She’s facing 25 years to life in prison at her sentencing.