KENOSHA, Wis. (AP) — A California attorney for an Illinois 17-year-old accused of fatally shooting two people and wounding a third during a night of unrest in Wisconsin is extracting himself from his criminal defense after prosecutors raised ethical concerns about the lawyer.

Los Angeles civil lawyer John Pierce has been at the forefront of the case of Kyle Rittenhouse, who is accused in the shootings during protests in Kenosha this summer. Pierce has also worked to help secure the $2 million bail for Rittenhouse, who was bound over Thursday for trial.

Kenosha County Assistant District Attorney Thomas Binger cited public records and news reports in his motion alleging that Pierce has “significant personal financial difficulties” and should not be allowed to represent Rittenhouse because “money that should be held in trust for the defendant may instead be used to repay attorney Pierce’s numerous creditors.” 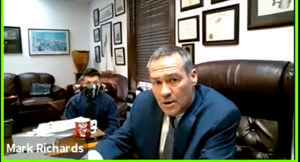 Shortly after the motion was filed Thursday, Pierce tweeted that he would take over all civil matters for Rittenhouse and would continue to raise funds for his defense. He said that Wisconsin attorney Mark Richards will handle the criminal case.

Pierce and other conservatives have portrayed Rittenhouse as a patriot and urged supporters to donate to #FightBack Foundation to bolster his legal defense.

“Attorney Pierce’s personal financial difficulties raise significant ethical concerns, especially when he has close ties to a substantial yet unregulated and unreported ‘slush fund’ that is intended solely for the benefit of the defendant,” Binger wrote in reference to the foundation.

Binger argues that donations for Rittenhouse’s legal defense should be held in trust, as is required of Wisconsin attorneys taking retainers to represent clients.

He’s also charged with homicide and attempted homicide for fatally shooting Joseph Rosenbaum and Anthony Huber, and wounding Gaige Grosskreutz on Aug. 25. The shooting happened during a night of unrest in Kenosha that followed the police shooting of Jacob Blake, a local Black man who suffered paralyzing injuries.