ROME (AP) — Environmental activists tossed pea soup on a Vincent van Gogh painting Friday in Rome to protest carbon use and natural gas extraction, but caused no damage to the glass-covered painting. 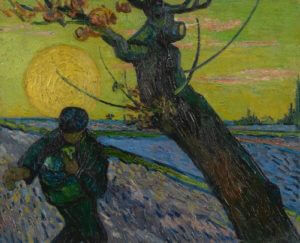 Security intervened immediately and removed the protesters kneeling in front of “The Sower” at the Palazzo Bonaparte to deliver a manifesto. Protesters from the same group, the Last Generation, earlier blocked a highway near Rome.

The painting belongs to the Kroller-Muller Museum in the Netherlands and was on loan for a show in Italy’s capital featuring works by Van Gogh. Officials said the 1888 painting was undamaged.

“Attacking art is an ignoble act that must be firmly condemned,’’ he said. “Culture, which is the basis of our identity, must be defended and protected, and certainly not used as a megaphone for other forms of protest.”

Climate activists have staged similar protests that have taken place at museums in Britain, Germany and elsewhere in Italy, targeting works by Van Gogh, Botticelli and Picasso.

The stunt backfired for some onlookers.

“It totally defeats the purpose.” Hans Bergetoft, a tourist from Stockholm, said. “I am really for the cause in itself, but not the action. Not the action that they took. Not at all.”