Tina Tintor, 23, of Las Vegas, “died from thermal injuries due to a motor vehicle collision on Nov. 2,” according to a statement from Clark County Coroner Melanie Rouse released through a county spokesman. 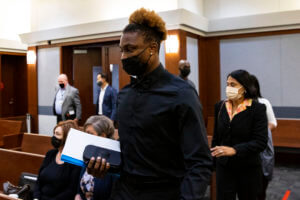 “Other significant conditions contributing to her death were inhalation of products of combustion, fractures of the nasal bones, right sided ribs … left forearm and (chest),” the statement said. “The manner of her death was accidental.”

Ruggs, 22, is accused of causing the pre-dawn crash by driving drunk at speeds up to 156 mph (251 kph) with his girlfriend in his Corvette sports car before it slammed into the rear of Tintor’s Toyota Rav4 on a residential street where the speed limit is 45 mph (72 kph).

The Raiders released Ruggs hours after the crash. He remains on house arrest with strict conditions after posting $150,000 bail. He has an ankle-wrapped GPS on one leg and an alcohol monitoring device on the other.

Attorneys for Ruggs and his girlfriend, Kiara Je’nai Kilgo-Washington, have declined to specify the injuries that they suffered. Both were hospitalized after the wreck early Nov. 2.

Ruggs’ lawyers, David Chesnoff and Richard Schonfeld, have suggested through court filings that they may question whether Ruggs caused Tintor’s death. They declined to comment Tuesday about the coroner’s findings.

The lawyers told a judge in a court document last month they found a witness who told them firefighters were slow to respond while flames consumed the car where Tintor and her dog, Max, died. They didn’t identify the witness.

Other witnesses told police they heard screams and tried to rescue Tintor and her dog but were turned back by heat, flames and smoke.

A judge last week delayed a preliminary hearing of evidence in Ruggs’ case from this week to March 10.

Clark County spokesman Erik Pappa denied in a Nov. 11 statement there were any “delays in response or in the attack on the fire.”

The statement said fire captain on scene reported that the vehicle was fully involved in flames when firefighters arrived “and the passenger compartment was not survivable for anyone inside.”
____
Associated Press writer Scott Sonner in Reno, Nev., contributed to this report.