MOAB, Utah (KSTU) — Police cadets in Utah receive training from the Utah Peace Officer Standards and Training. However, from there, each department approaches any additional training and testing on its own.

“When they get out to their individual agencies, they get additional training and those are centric to the communities that they serve,” said Chris Bertram, a retired Unified Police Department deputy chief. “I think this is a perfect opportunity with regards to what happened in Moab that we re-evaluate what it is that we expect from our law enforcement officers, and it may be we don’t need to re-evaluate anything — it may be: ‘You’ve been told what to do; You will now do that.’”

Bertram says there are typical signs officers look for when approaching domestic situations, but times have changed with how law enforcement handles each incident.

“I kind of wonder in the 30 years of evolution, has it evolved in other ways that we may be applying it in the wrong way in some police departments, where we’re not arresting, we’re citing and releasing?” Bertram said. “Where in fact the law says: ‘No, we need a custodial arrest, we need a no-contact order?’”

In light of the recent lawsuit sought by the family of Gabby Petito, who was killed just weeks after an incident between her and Brian Laundrie in Moab last year, Bertram wonders if more direction is needed from lawmakers to police departments regarding how they handle domestic situations. 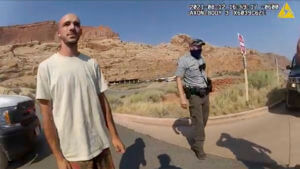 FILE- In this image taken from police body camera video provided by The Moab Police Department, Brian Laundrie talks to a police officer after police pulled over the van he was traveling in with his girlfriend, Gabrielle “Gabby” Petito, near the entrance to Arches National Park in Utah on Aug. 12, 2021. The family of Petito filed a notice of claim Monday, Aug. 8, 2022, of plans to file a wrongful death lawsuit against the tourist town of Moab, Utah, over police officers’ handling of an encounter with Petito and her boyfriend weeks she was found dead in Wyoming. (The Moab Police Department via AP, File)

“We expect that whether you’re in Moab or Salt Lake or Riverton that that officer has the same skills to investigate a domestic violence, and that’s just not the case,” he said.

Following a lengthy independent investigation, the City of Moab released a statement along with a detailed report regarding the incident that took place on Aug. 12, 2021, between Petito and Laundrie.

Included in the report was a note from the City that read: “Plans are in place to add a trained domestic violence specialist to oversee incidents investigated by Moab officers. We also will implement added and ongoing training and testing to ensure that the officers understand policies and procedures.”

When asked on Monday if said plans and training have been implemented, the City declined to comment due to the pending litigation.

This story was originally published August 8, 2022 by KSTU in Salt Lake City, an E.W. Scripps Company.