LOS ANGELES (AP) — An attorney for Harvey Weinstein on Friday repeatedly challenged a woman over why she didn’t raise more objections or leave the hotel room in Puerto Rico where she said he sexually assaulted her during a 2003 film shoot.

Attorney Mark Werksman asked the woman, known during Weinstein’s Los Angeles rape and sexual assault trial only as Ashley M., whether she ever had a second thought where she said to herself, “I’m just going to walk right back out that door?” 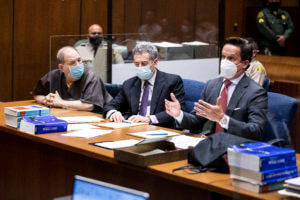 The woman was a 22-year-old dancer on the Puerto Rico set of the film “Dirty Dancing: Havana Nights,” which was produced by Weinstein’s company, Miramax.

In her first day of testimony Thursday, Ashley M. said that she went with Weinstein to the hotel because she had been assured she was headed to a meeting to discuss future opportunities, but she said once they were alone, Weinstein pushed her on to a bed, straddled her, and masturbated.

Werksman asked her whether she really didn’t expect anything sexual after Weinstein, according to her earlier testimony, brought up getting a “naked massage” from her during their first conversation at the set.

She repeated that she had been reassured by the woman who was Weinstein’s assistant at the time that she would remain with them, and that he only wanted to discuss future projects.

“I just basically did what I thought the people that were running the meeting wanted me to do. I really had no interest in being an actress. I had spent my life dancing,” she said. “I was engaged to be married. I wanted to finally start my life, maybe finally wanted to start a family at that time.”

She and Weinstein entered the room but the assistant didn’t follow them, and instead closed the door behind them, she said.

Ashley M. had said she wasn’t sure they were headed to a private room, that they might be going to an office or some other space at the hotel.

Werksman asked whether she thought to herself, “’I’m now entering a hotel, this isn’t about work.’ Did that dawn on you at any moment?”

She said she was being deferential because Weinstein was “in charge,” a feeling she got strongly from others on the set.

Werksman asked her repeatedly why she didn’t protest more.

“Did you verbalize or express the panic you were feeling out loud?” Werksman asked.

She said earlier in her testimony that she knows she told him to stop, but that she kept most of her objections silent out of fear. 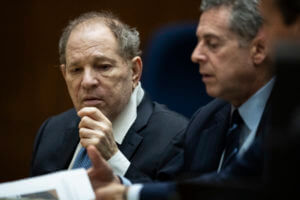 She said Weinstein told her “It’s OK, it’s not like we’re having sex.”

Werksman asked her if she responded to that.

“I just was trying to leave,” she said. “I was just hoping that nothing worse was going to happen.”

Werksman asked how she had been dressed. She said she couldn’t remember, but doesn’t think she was in the orange dress that was her wardrobe for the shoot.

Ashley M. is not one of the five women Weinstein is charged with sexually assaulting. She is one of four others who have been allowed to testify at the trial about his propensity for such crimes.

Weinstein has pleaded not guilty, and denied engaging in any non-consensual sex.

The 70-year-old former movie mogul is already serving a 23-year sentence for a New York conviction that is under appeal.

The Associated Press does not typically name people who say they have been sexually abused unless they have come forward publicly.

Ashley M. told her story to the New York Times in October of 2017, when the newspaper’s accounts of women who say Weinstein sexually assaulted them put the movie executive at the center of the #MeToo movement.

Her trial testimony was the first time she has told her story in a courtroom.

Ashley M.’s mother and ex-husband were called to the stand after her. Both testified that she gave them accounts of her assault, giving very few details, in phone calls from Puerto Rico shortly after it happened.

Jurors on Friday also examined pictures of Weinstein’s body to see if they matched descriptions provided by the witnesses.

Six more accusers have yet to take the stand. The trial is expected to last another five weeks.