Terryln Hall was just 6 years old when her mother, Faith, was fatally shot by a former boyfriend.

Now, nearly 30 years later, Hall and her sister — along with their uncle — oppose Alabama’s plan to execute the man who killed their mother. Unless a judge or the governor intervenes, Joe Nathan James Jr., 49, will will die by lethal injection Thursday evening at a south Alabama prison. 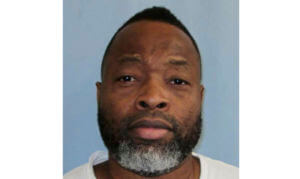 This undated photo provided by the Alabama Department of Corrections shows inmate Joe Nathan James Jr. Terryln Hall said she, her sister and her mother’s brother oppose Alabama’s plan to execute the man convicted of killing their mother. Unless a judge, or the governor, intervenes, Joe Nathan James Jr., will be given a lethal injection on Thursday, July 28, 2022 at a south Alabama prison. (Alabama Department of Corrections via AP)

“We thought about it and prayed about it, and we found it in ourselves to forgive him for what he did. We really wish there was something that we could do to stop it,” Hall said in a telephone interview with The Associated Press.

Faith Hall briefly dated James, but he became obsessed with her, prosecutors said. On Aug. 15, 1994, he forced his way inside an apartment, pulled a gun from his waistband and shot her three times. A Jefferson County jury convicted James of capital murder in 1996 and voted to recommend the death penalty, which a judge imposed.

The conviction was overturned when the Alabama Court of Criminal Appeals ruled that a judge wrongly admitted some police reports into evidence. James was retried and again sentenced to death in 1999, when jurors rejected defense claims that he was under emotional duress at the time of the shooting.

Faith Hall was 26 when she died, leaving behind two young daughters. Six-year-old Terryln Hall struggled to understand what had happened to her mother.

“I knew that she wasn’t coming back, but I just never understood why. Why would he do that? That’s still a question that I want to know to this day: Why?” she said.

Hall said her only real memory of her mother is as a hard worker who took care of her daughters and “whoever else was around.”

The road to forgiveness was a long process for Hall.

“In this case, the Hall family, with deep prayer, consideration, and conviction, is asking you to have mercy by sparing the life of Mr. James,” Givan said in a statement.

Alabama Attorney General Steve Marshall urged Ivey to let the execution proceed, despite the request from the victim’s family, writing that, “it is our obligation to ensure that justice is done for the people of Alabama.”

The governor has not indicated what she plans to do. Ivey spokeswoman Gina Maiola wrote in an email that the governor “will carefully review all of the facts and information surrounding the case.”

Hall realizes that asking the state to spare the life of the man who killed her mother may seem counterintuitive, but she’s compelled by deeply held beliefs.

“I know it may sound crazy. Like, you really want this man to live? But … I just feel like we can’t play God. We can’t take a life. And it’s not going to bring my mom back,” she said.