WASHINGTON (AP) — The fatal shooting of a middle-school student has sparked public uproar as the nation’s capital struggles with rising tensions about violent crime and racial justice.

Police said they found 13-year-old Karon Blake early Saturday morning suffering from multiple gunshot wounds after having been shot by a local resident, who said Blake had been breaking into area cars. 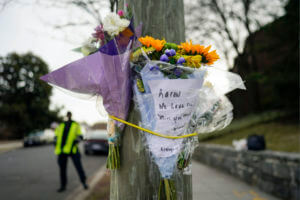 Flowers are secured to a pole as a memorial to Karon Blake, 13, on the corner of Quincy Street NE and Michigan Avenue NE in the Brookland neighborhood of Washington, Tuesday, Jan. 10, 2023. The note reads, “Karon we will love and miss you dearly.” Karon Blake was shot and killed on the 1000 block of Quincy Street NE early morning Saturday, Jan. 7, 2023. (AP Photo/Carolyn Kaster)

According to the police media report on the incident, the resident “heard noises and observed someone that appeared to be tampering with vehicles. The male resident went outside, armed with a registered firearm, to further investigate. There was an interaction between a juvenile male and the male resident. During the interaction, the male resident discharged his firearm striking the victim.”

Blake died of his injuries at the hospital, and his death has sparked a fierce community response from activists demanding that the shooter be arrested and his name be made public.

The shooter has not been charged with a crime or publicly identified, but police and the U.S. Attorney’s Office say the investigation is ongoing.

“I didn’t know you could just kill somebody over property damage. That’s just crazy,” said Sean Long, the teen’s grandfather.

Struggling to speak over the shouts of the crowd, Assistant Police Chief Morgan Kane of the Metropolitan Police Department said she could not share the shooter’s identity or any details about the investigation in progress.

“We want the same thing you want,” Kane said. “We want to find out what happened and whatever chips fall, they fall.”

Area resident Tracey Lucas addressed Kane and accused the MPD of taking a soft approach to what she said was vigilante violence against a young Black man. She compared the shooting to the 2012 killing of Trayvon Martin by George Zimmerman — an event that led to the creation of the Black Lives Matter movement.

“I don’t see why you are protecting his name,” Lucas said. “Knowing who the killer is does not breach this investigation.”

At one point, the crowd broke into a loud chant protesting D.C. Mayor Muriel Bowser’s absence, shouting, “Where is the mayor?”

Earlier in the day, MPD Chief Robert Contee pleaded for patience and warned against misinformation and hysteria.

“There has been too much misinformation swirling around this incident,” Contee said. “Too many people have made assumptions about this case and it is unfair to the grieving family.”

The controversy comes at a delicate time for Bowser, who is regarded by Black Lives Matter and other activist groups as a staunch police defender. Last week, Bowser, who just began a third term in office, vetoed a sweeping revision of the city’s criminal code that would, among other things, reduce the maximum penalties for offenses such as burglary, carjacking and robbery.

In coming out against the bill, Bowser stated, “Anytime there’s a policy that reduces penalties, I think it sends the wrong message.”

The D.C. Council, which unanimously approved the revision, appears likely to override her decision.