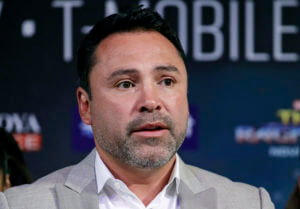 The lawsuit filed Monday in Los Angeles County Superior Court alleges that the unnamed woman had a consensual sexual relationship with De La Hoya until he assaulted her at his home in Pasadena in November 2017.

The lawsuit goes into graphic detail in its allegations against De La Hoya, claiming the former boxing champion was intoxicated at the time that he overpowered the woman. The lawsuit doesn’t specify whether she filed a complaint with the police after the alleged attack, which left her requiring medication for “extreme swelling and pain.”

The complainant says she went to a hospital after the alleged attack and eventually sought psychological treatment, during which she was diagnosed with post-traumatic stress disorder. The woman claims she still has daily symptoms of depression and anxiety.

“Oscar is a very successful businessman, running one of the country’s leading sports and entertainment companies — thus a prime target,” the statement reads.

De La Hoya won a gold medal at the 1992 Olympics and went on to claim world title belts in six weight classes. He was one of the most successful boxers of his generation upon his retirement in 2009, and he has run Golden Boy Promotions since 2002.

De La Hoya has been married to Millie Corretjer since 2001, and they have two children. The former boxer has acknowledged substance abuse problems several times in his past, admitting alcohol abuse and cocaine use.