SAN DIEGO (AP) — Prosecutors in California plan to seek the death penalty against a former college student accused of carrying out a 2019 attack on a San Diego-area synagogue that left one woman dead and three others wounded. 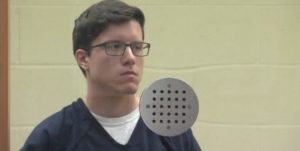 The San Diego County prosecutors said during a court hearing Thursday that they will ask for the death sentence against John T. Earnest in the April 27, 2019, attack on the Chabad of Poway synagogue.

That’s despite Gov. Gavin Newsom signing an executive order last year placing a moratorium on executions. Even before that, California has not executed anyone since 2006.

Prosecutors say Earnest, a 20-year-old nursing student, opened fire with a semi-automatic rifle during the last day of Passover services. The attack killed 60-year-old Lori Gilbert-Kaye and wounded three others, including an 8-year-old girl and the rabbi, who lost a finger.

Earnest then reportedly called 911 to say he had shot up a synagogue because Jews were trying to “destroy all white people.”

He is scheduled to go to trial June 2 after pleading not guilty to hate-crime-related murder, attempted murder and other charges.

Earnest also will be tried on an arson charge for a fire at a nearby mosque that happened weeks before the synagogue shooting. Nobody was hurt during the fire.