DADE CITY, Fla. (Court TV) — Curtis Reeves’ defense rested its case Thursday after calling its 17th witness, the defendant himself, who insisted that he fatally shot Chad Oulson because he was “trapped” in his seat and had no other way to defend himself.

“I thought this was the end of the line for me,” he said.

Reeves spent nearly five hours on the stand testifying about his law enforcement experience, his physical condition, and what was going through his mind when he crossed paths with Oulson and his wife inside the Cobb Theater in Wesley Chapel on January 13, 2014.

Reeves started his testimony by describing his rise through the Tampa Police Department to captain over 27 years, emphasizing his commitment to training and his development of the SWAT unit. A bout with cancer hastened his retirement at 51, and he moved onto head of security at the Busch Entertainment theme park, he said. He spent 11 years at the theme park before compounding health conditions caught up with him and he needed to get off his feet, he said.

On the shooting, Reeves said he was defending himself from a “volatile” man who attacked him twice in a short period of time. Initially, however, Reeves said he did not perceive Oulson as a threat, but rather just a “mouthy” and “profane” moviegoer who refused to abide by the theater’s rules and put away his phone. Reeves said it wasn’t until he returned to his seat after talking to the theater manager that Oulson started demonstrating “explosive behavior” and “uncontrolled rage.”

First, Reeves said he felt something hit him above his left eye – maybe a phone, maybe a fist – leaving his glasses “askew” on his face and blurring his vision. Reeves said the next thing he perceived was Oulson standing up, turning and coming at him in his seat.

“I’m sitting in a completely defensive position and he’s standing up — he looked like a monster in front of me,” Oulson said. “I had nowhere to go and no way to get there.” 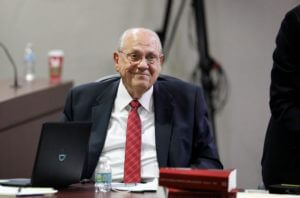 Reeves said he had no recollection of popcorn being thrown at him and did not shoot Oulson because of the popcorn.

“I shot Mr. Oulson because I thought he was gonna seriously injure me or potentially kill me,” he said. “I didn’t want to shoot anybody. I came to the theater with my family to enjoy a movie, not to be attacked by a man who was out of control.”

On cross, prosecutor Scott Rosenwasser challenged Reeves on his claim he was trying to deescalate the situation by pointing out inconsistences between his testimony and his police statements.

Reeves testified Thursday that upon returning to the theater, he saw Oulson staring at him and overheard him complaining. He said he tried to defuse the situation by telling Oulson that he would not have gone to the manager if he’d put his phone away. In his police statement, he never said Oulson was staring at him or that he heard Oulson grumbling or that he tried to “apologize” to Oulson, leading Rosenwasser to accuse Reeves of re-engaging with Oulson when Oulson had made it clear he wanted Reeves “out of his face.”

Rosenwasser also pointed out that Reeves did not tell police that Oulson stood up turned around to face him, as he testified. In a lengthy exchange, Rosenwasser replayed the video and had Reeves look at multiple still photos to confirm what happened. Reeves never wavered from his claim, but now the jury has something else to consider when they go into the jury room.

Reeves ended his cross examination on a contrite note, saying he thinks about the incident every day and second-guesses his actions. “If you’re human and you have respect for human life you would second-guess [it] constantly.”