BREVARD COUNTY, Fla. (WPTV) — A man was fatally shot by deputies Saturday night after kidnapping two women and leading deputies in a chase across several counties.

The chase began in Osceola County after the suspect shot one of the victims. 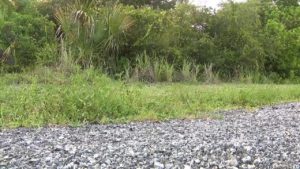 A man was fatally shot by deputies June 25 after kidnapping two women and leading deputies in a chase across several counties. (WPTV)

The pursuit continued through the southern part of Brevard County with the suspect firing multiple times at Indian River County deputies.

According to Brevard County Sheriff Wayne Ivey, the suspect’s vehicle crashed and got stuck. The suspect threw one of the victims out of his car and took the other victim at gunpoint into a heavily wooded area.

Air units from Osceola, Brevard and Indian River counties assisted in tracking the suspect and victim through the woods.

The suspect continued firing multiple shots at deputies, who returned fire and fatally struck the suspect.

Both victims received injuries and were treated at a local hospital.

The identities of the suspect and the deputies involved are not being released at this time.

The investigation is ongoing and is being conducted by the Brevard County Sheriff’s Office Homicide Unit.

As is customary in officer involved shootings, the Brevard County Deputies have been placed on paid administrative leave pending the outcome of the investigation.

This story was originally published June 26 by WPTV in West Palm Beach, an E.W. Scripps Company.