CORONA, Calif. (AP) — A man charged with fatally shooting two young people inside a Southern California movie theater last week was accompanied by three friends who told investigators they were alarmed because they believed he had brought a gun into the cinema, a newspaper reported.

Police records obtained by the Orange County Register and reported in a story Monday show the suspect’s friends told detectives he was acting so strangely that they snuck out of the theater, apparently without warning anyone. 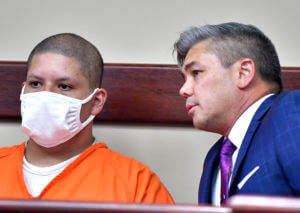 FILE – In this July 30, 2021 file photo Joseph Jimenez, 20, left, appears with his attorney Charles Kenyon in the Riverside Hall of Justice, in Riverside, Calif. Jimenez, a man suspected of shooting two people, killing one, inside a Southern California movie theater has been charged with murder and attempted murder, prosecutors said. The young man who had been on life support after he and a friend were shot has died, police and his family said Saturday, July 31, 2021. (Will Lester/The Orange County Register via AP,File)

Two of the friends told investigators they later saw defendant Joseph Jimenez run out of the Regal Edwards cinema in the city of Corona and speed away in his car, according to a police detective’s sworn declaration filed in court.

A short time later on the night of July 26, a theater employee found Rylee Goodrich, 18, and Anthony Barajas, 19, with gunshot wounds to their heads. Goodrich died at the scene. Barajas, a budding social media star, died at a hospital on Saturday.

Barajas, known online as itsanthonymichael, had nearly 1 million followers on TikTok and more on other platforms. 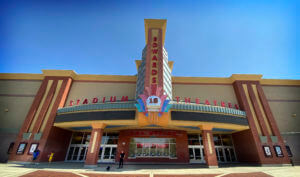 FILE – In this July 27, 2021 file photo news crews report from in front of the Regal Edwards Corona Crossings movie theater. A young man who had been on life support after he and a friend were shot inside a Southern California movie theater has died, police and his family said Saturday, July 31, 2021. (Terry Pierson/The Orange County Register via AP, file)

The detective’s declaration, written to obtain a search warrant for Jimenez’s home and other property, for the first time describes how police connected Jimenez with the fatal shootings, the newspaper reported.

Jimenez has been jailed since his arrest. A phone message left Tuesday seeking comment on the case from Charles Kenyon, a lawyer for Jimenez, was not immediately returned.

Jimenez has been charged with murder and attempted murder, but the second count is expected to be upgraded to murder by the time Jimenez appears in court Thursday for his arraignment, said John Hall, a spokesman for the Riverside County District Attorney’s Office.

The suspect acted alone, and there’s no indication he knew the victims or that Barajas’ role as a TikTok influencer played a role in the crime, Corona police Cpl. Tobias Kouroubacalis told reporters last week.

The Register reported that it was unclear whether the inaction by the three friends amounts to a crime. Their names were not listed in county jail records on Tuesday.