HOUSTON (AP) — Authorities say newly tested DNA evidence helped them make an arrest in the killings more than eight years ago of a family, including two boys, who were shot in their suburban Houston home.

Feng Lu, 58, who had long been considered a suspect in the case, was arrested on Sunday by police in San Francisco after his arrival from China, according to Harris County Sheriff Ed Gonzalez. 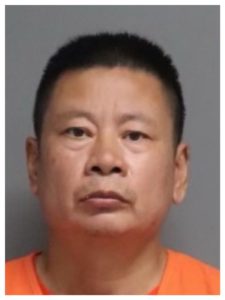 Lu has been charged with capital murder in the deaths of Maoye Sun and his wife Mei Xie and the couple’s two sons, 7-year-old Titus and 9-year-old Timothy, the sheriff said in a tweet on Tuesday.

Lu was being held Wednesday at a jail in San Mateo County, California, pending extradition to Texas. Court records did not list an attorney for Lu who could speak on his behalf.

The bodies of all four family members were found on Jan. 30, 2014, in their home in the Houston suburb of Cypress. All had been shot in the head. Investigators said Sun was last seen alive leaving work on Jan. 24.

Lu was linked to the killings after new forensic testing done in January on samples that previously were not able to be identified showed that Lu’s DNA was found on a purse that belonged to Xie, according to a probable cause affidavit.

The DNA testing contradicted statements Lu had made previously to investigators in which he had said he did not know Xie or her children and didn’t know where the family lived, according to the affidavit.

Authorities have not disclosed a motive for the killings, but according to the affidavit, Lu had unsuccessfully tried to get Sun’s help with a promotion at work. Both had worked at Cameron International, which provides products and services to oil and gas companies.

Lu “stated he believed that (Sun) made derogatory comments about him to fellow co-workers … which may have been the reason he did not get the promotion,” according to the affidavit.

Investigators say Lu had bought a handgun a week before the killings and then returned it five days after the killings without the weapon’s barrel. Authorities allege Lu gave inconsistent stories about what happened to the gun’s barrel. Investigators also allege that bullets Lu had bought with the gun had likely been manufactured on the same machine as the bullet that killed one of the boys, Titus.