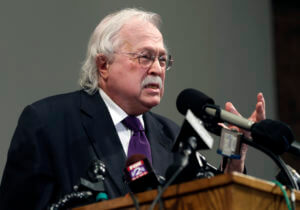 The medical examiner says Wednesday she stands “firmly” behind her findings in response to Baden’s statement.

Experts have said the bone in question often breaks in suicidal hangings.

Epstein was found dead in his cell at the Metropolitan Correctional Center with a bedsheet around his neck on Aug. 10. He’d been held there since his July 6 arrest on sex trafficking charges.