CHICAGO (AP) — Drew Peterson, the former Chicago-area police sergeant who was convicted in 2012 of killing his third wife, is set to return to court this month after a judge agreed to hear his motion to vacate the verdict.

Will County Judge Edward Burmilla scheduled the Jan. 21 hearing after finding a “gist of a constitutional” claim in Peterson’s six-page handwritten motion, according to the Chicago Tribune. Burmilla assigned Peterson a public defender and two investigators from the public defender’s office. 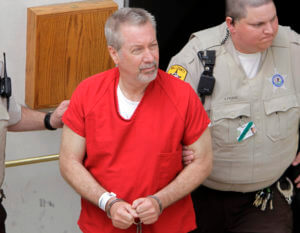 FILE – In this May 8, 2009, file photo, former Bolingbrook, Ill., police Sgt. Drew Peterson leaves the Will County Courthouse in Joliet, Ill., after his arraignment on charges of first-degree murder in the 2004 death of his former wife Kathleen Savio. Peterson is getting another chance to argue that his murder conviction in the death of his third wife should be thrown out. A Will County judge has scheduled a Jan. 21, 2022 hearing on Peterson’s motion that the conviction should be tossed because his lead attorney did not provide effective counsel and prosecutors acted improperly. (AP Photo/M. Spencer Green, File)

Peterson, from the Chicago suburb of Bolingbrook, is serving a 38-year prison sentence in the 2004 killing of Kathleen Savio. He will follow that sentence with 40 more years after he was convicted in 2016 of plotting to kill the prosecutor who put him behind bars.

Savio’s body was found in a dry bathtub in 2004, weeks before a scheduled hearing to determine money and child custody issues related to her divorce from Peterson. Her death was initially ruled an accident, but her remains were exhumed after the 2007 disappearance of Peterson’s fourth wife, Stacy. Savio’s death was subsequently ruled a homicide.

In his motion filed in October, Peterson argues that his lead attorney, Joel Brodsky, did not provide effective counsel. Peterson contends that Brodsky threatened other attorneys with removal from the case if they disagreed with him, and that he wanted to testify in his own defense but that Brodsky would not allow it. Peterson also alleges prosecutorial misconduct and witness intimidation.

Further, he argues that two key witnesses who were allowed to testify under the state’s hearsay law should not have been permitted to testify. The Illinois Supreme Court ruled in a unanimous 2017 decision that hearsay testimony from Savio and Stacy Peterson did not violate Drew Peterson’s constitutional right to confront his accusers because of evidence that he killed them to prevent their testimony.

The Will County State’s Attorney’s office said in a 23-page written response that there was no merit to Peterson’s claims, and denied any misconduct or witness intimidation.

Prosecutors pointed out that the state’s higher courts, including the Supreme Court, ruled against Peterson, and provided court transcripts in which he told the judge that he chose not to testify but never mentioned that Brodsky prevented him from taking the witness stand.

Brodsky agreed that Peterson’s claims were or could have been raised in previous appeals and that higher courts have already ruled that there was nothing improper about the trial.

“There’s nothing here,” said Brodsky, whose law license was suspended for two years in 2019.