LOS ANGELES (AP) — Robert Durst is a sick, old, defenseless man beaten up and demonized by prosecutors to cover up a lack of evidence against him, his lawyer said Thursday in closing arguments at the New York real estate heir’s murder trial.

Attorney Dick DeGuerin told jurors not to be swayed by ghastly images of the body Durst dismembered in Texas and tossed out to sea, saying it was only meant to make them hate him.

DeGuerin conceded his client did look “really bad” after nearly three weeks of testimony, including nine days of punishing cross-examination that exposed several lies. He accused the prosecutor of “beating up on a sick, old man who can’t defend himself.”

“I wouldn’t blame you after hearing what you’ve heard if you hate Bob Durst and believe he’s a liar,” DeGuerin said in Los Angeles Superior Court. “Making Bob Durst a liar does not make him a killer.” 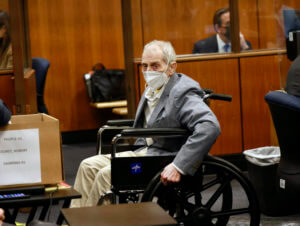 Robert Durst spins his wheelchair s in place as he looks at people in the courtroom in Inglewood, Calif. on Wednesday, Sept. 8, 2021, with his attorneys for closing arguments presented by the prosecution in the murder trial of the New York real estate scion who is charged with the longtime friend Susan Berman’s killing in Benedict Canyon just before Christmas Eve 2000. (Al Seib/Los Angeles Times via AP, Pool)

Durst, 78, who sat hunched in a wheelchair as his lawyer spoke, has pleaded not guilty to murder in the point-blank shooting of Susan Berman in December 2000 at her Los Angeles home.

Prosecutors said Durst killed her as she planned to speak to authorities about how she provided a phony alibi for him when his wife went missing in New York in 1982.

DeGuerin said prosecutors failed to prove how, when and where Kathie Durst was killed, though he said circumstantial evidence indicates she is probably dead. Her body has never been found, and no one has been charged with a crime in connection with her disappearance.

Robert Durst said he put his wife on a train bound for New York City after a weekend at their lakeside home in Westchester County and never saw or heard from her again. He has admitted lying about having cocktails with neighbors that night and speaking with his wife by phone after she reached their Manhattan penthouse.

DeGuerin said there is no credible evidence to support the prosecution theory that Berman had impersonated Kathie Durst the next day to phone in sick at the medical school she attended. Prosecutors said the call made it appear Kathie Durst was alive after she was last seen by her husband.

“If you remove the emotions that the prosecution has played upon that Bob Durst is a bad guy and Bob Durst lies and that Bob Durst will lie about anything and look at what the evidence or lack of evidence is, then you see there’s no evidence,” DeGuerin said.

During his many days on the stand, Durst said he had lied under oath and would lie to get out of trouble. He said he had not killed Berman or his wife, but said he would lie if he had done so.

DeGuerin said it was like the trick question: “Have you quit beating your wife?”

“What’s a good answer to that?” DeGuerin said. “The problem is the false premise: beating your wife. ‘If you had killed Susan, would you tell us?’ It’s a false premise.”

Although Durst is only on trial in Berman’s killing, prosecutors presented evidence he killed his wife to provide the motive for killing Berman — a key witness. Several of Berman’s friends testified she either told them Durst admitted killing his wife or she helped cover his tracks.

Prosecutors have also introduced evidence from a Galveston, Texas, trial in which Durst was acquitted of murder.

DeGuerin successfully defended Durst in the 2001 killing of Morris Black. Durst testified that Black pulled a gun on him and was shot during a struggle for the weapon. He was convicted of disposing of evidence for chopping up Black’s body and dumping it in Galveston Bay.

DeGuerin accused prosecutors of trying to inflame the jury by dredging up the Texas case, particularly displaying gruesome images of body parts that washed ashore.

“The prosecution is trying to get a do-over of that trial,” DeGuerin said.

Prosecutors said Black was killed because he discovered Durst’s identity while he hid out disguised as a mute woman because he feared he was going to be charged with killing his wife in New York.

DeGuerin said that made no sense under the prosecution’s theory. Berman was the witness who could connect him to Kathie Durst’s death, and she was killed nine months earlier.

DeGuerin did little to minimize or explain what a prosecutor said was the most damning piece of evidence against Durst — the so-called cadaver note directing police to Berman’s lifeless body.

In interviews for a documentary film, Durst denied writing the note that he said “only the killer could have written.” But he was caught in the lie when the makers of “The Jinx: The Life and Deaths of Robert Durst” confronted him with an envelope he sent Berman a year earlier with identical handwriting and Beverly Hills misspelled as “Beverley” on both.

“You can ignore everything else in this case,” Balian said. “The defendant has stipulated, ‘I wrote the cadaver note and envelope that only the killer could have written.’ ”

Durst testified that after discovering Berman’s body, he wanted police to find her but didn’t want anyone to know he had been in her house because he feared he would be suspected of killing her.

He acknowledged that even he had difficulty imagining he could have written the note without killing Berman.

Balian said it was one of the truest things Durst said amid a ton of lies.