NEW YORK (AP) — Relatives of Robert Durst’s first wife, whose 1982 disappearance culminated last year in a murder indictment against him, has filed a wrongful death lawsuit against his second wife, who stands to collect millions of dollars from the late real estate scion ‘s estate.

A lawyer for the McCormack family, Robert Abrams, said Charatan is believed to be the sole or primary beneficiary of a trust worth tens of millions of dollars and is now the nominated executor of Durst’s estate.

Abrams alleges the money was promised to Charatan in exchange for her help and recently notified Durst’s trust that Kathie Durst’s family would be seeking more than $100 million from Charatan and Durst’s estate. 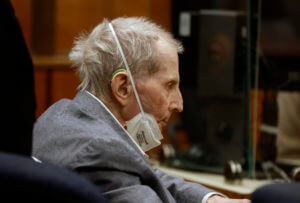 Robert Durst died Jan. 10 in a California hospital while serving a life sentence for shooting his best friend, Susan Berman, in the back of the head at her Los Angeles home in 2000 as she was preparing to tell police about her involvement in Kathie Durst’s death.

On Nov. 1, just weeks after his sentencing in the Berman case, a grand jury in the New York City suburbs indicted Durst on a second-degree murder charge for killing Kathie Durst.

The McCormack family’s previous wrongful death lawsuit, against Durst in 2019, was thrown out because it was filed too late. But the judge said the case could be revived if Durst were to face criminal charges in connection with Kathie Durst’s death.

Durst married Charatan in December 2000. Abrams alleged in a previous lawsuit now under appeal that Charatan wed Durst to help him evade authorities after the investigation into Kathie Durst’s disappearance was reopened.

Charatan has never been charged with a crime in the case, and her lawyers said in court papers in 2019 that she bears no responsibility related to Kathie Durst’s disappearance, which occurred six years before she met Robert Durst.

Attorney Scott Epstein said allegations against her were based on rumor “more suitable for a work of fiction.”

“The plaintiffs’ claims are at best an example of the most extreme form of speculation and at worst nothing more than a thinly veiled attempt to publicly embarrass and extort money from Ms. Charatan, an innocent party, who is perceived by the plaintiffs as a deep pocket,” Epstein wrote.