SAN JOSE, Calif. (AP) — Biotechnology entrepreneur Elizabeth Holmes, a former billionaire accused of engineering a massive medical scam, expressed some remorse while on the witness stand Tuesday, but denied trying to conceal that her company’s blood-testing methods weren’t working as she had promised. 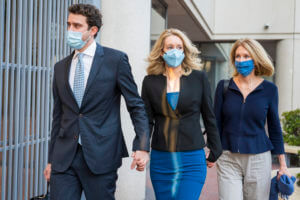 In her third day of testimony during the high-profile criminal trial, Holmes acknowledged making some mistakes as CEO of Theranos, a company she founded in 2003 when she was just 19. But she repeatedly emphasized that she made most of her decisions with the help of other executives and a respected board that included former cabinet members in various presidential administrations.

Holmes, now 37, also made it clear that she never stopped believing that Theranos would revolutionize health care with a technology that was supposed to be able to detect a wide range of diseases and other problems by testing just a few drops of blood, even when confronted with adversity.

Theranos eventually collapsed after a series of explosive articles i n The Wall Street Journal and an audit by federal regulators exposed serious and potentially dangerous flaws in the company’s blood tests. The scandal wiped out Holmes’ fortune, which was estimated at $4.5 billion in 2014 when she was the subject of a glowing cover story on Fortune magazine.

Holmes addressed several prickly areas that government prosecutors highlighted while presenting their case during the first 10 weeks of the trial. But she and her lawyers still haven’t touched a hot-button issue they have suggested as a key defense: Whether Holmes was being secretly manipulated by her former lover and Theranos’ former chief operating officer, Sunny Balwani, into unethical behavior.

In court documents unsealed shortly before the trial began in early September, Holmes’ lawyers accused Balwani of subjecting Holmes to “intimate partner abuse.” Balwani, who faces a separate fraud trial next year, has denied those allegations through his attorney.

Balwani’s role as an executive at Theranos came up Tuesday for the first time since Holmes took the stand late last week. At one point, Holmes indirectly criticized Balwani for a brusque 2013 email he sent scolding a former Theranos manager, Surekha Gangakhedkar, in the middle of the night. Gangakhedkar, who testified about expressing concerns about problems with Theranos’ technology, eventually resigned, citing the stress she felt. 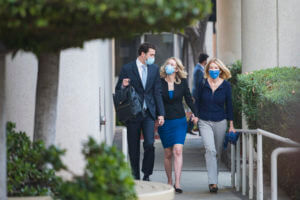 Elizabeth Holmes, center, looks at her partner Billy Evans, left, as they walk into federal court in San Jose, Calif., Monday, Nov. 22, 2021. Holmes is accused of duping elite financial backers, customers and patients into believing that her startup was about to revolutionize medicine. (AP Photo/Nic Coury)

Holmes told the jury she regretted that episode with Gangahedkar. “This is the wrong way to treat people,” she said.

Balwani also drew up a series of financial projections that have been a focal point of the trial, according to Holmes. In documents distributed to prospective investors, Theranos forecast annual revenues of $140 million in 2014 and $990 million in 2015. Other evidence presented during the trial showed the company never came remotely close to hitting those targets.

Holmes testified the 2015 revenue prediction was based largely on an anticipated expansion into 3,000 Walgreens stores that never materialized after the retailer backed out of its Theranos partnership.

Another moment of contrition came when she took responsibility for adding the logo of Pfizer, a major drug maker, to a report extolling the effectiveness of Theranos’ technology. That decision came after an internal Pfizer report that Holmes said she never SAW? had expressed doubts about the reliability of Theranos’ blood tests.

“I wish I had done it differently,” Holmes said. Several investors have testified that seeing Pfizer’s logo on the report helped persuade them to invest in Theranos.

Holmes, who raised nearly $1 billion after founding Theranos in 2003, is facing allegations of duping investors, patients and business partners while running the Palo Alto, California, company. If convicted, she could face a prison term of up to 20 years.