LOS ANGELES (AP) — The estranged brother of Robert Durst, the real estate heir on trial in his best friend’s slaying, reluctantly testified Monday that the two never got along and he feared his oldest sibling would kill him.

Douglas Durst, chairman of one of New York’s largest commercial real estate firms, said his brother was angry and bitter over an acrimonious inheritance settlement for tens of millions of dollars. He had not seen his brother in 20 years but is worried because he has shown up at his home several times over those years.

The chairman of the Durst Organization, which owns some of Manhattan’s premier skyscrapers and 2,500 apartments, said he and his brother have fought since they were children.

“He treated me miserably,” Douglas Durst said. “He would fight with me at every chance. He would embarrass me.”

Despite the bad blood, Douglas Durst said he did not want to testify against his brother, who is on trial on charges of fatally shooting Susan Berman in 2000 at her Los Angeles home. He said he cooperated with prosecutors under threat of subpoena.

“There are other places I’d much rather be,” he said.

Prosecutors say Berman provided an alibi for Robert Durst after he killed his first wife, Kathie, in 1982 and that he silenced his friend to keep her from telling police what she knew about the disappearance. Robert Durst has pleaded not guilty.

Kathie Durst had told Douglas Durst she planned to seek a divorce from his brother, he testified.

Douglas Durst said his brother told him that she had vanished a couple of days after he put her on a train to New York City from their lakeside house in Westchester County. Robert Durst said that was the last time he saw his wife.

“His tone was very neutral,” Douglas Durst said. “There was no great anxiety in his tone. It seemed a little strange.”

Kathie Durst has never been found, but she was declared legally dead. Robert Durst has long been considered a suspect in her death but has denied any involvement and has never been charged with a crime related to her disappearance.

Douglas Durst, tan and wearing a crisp white shirt with French cuffs and a gray mask, cut a much different figure than his ailing brother. 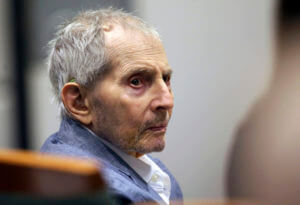 FILE – In this March 10, 2020, file photo, real estate heir Robert Durst looks over during his murder trial in Los Angeles. A judge on Monday, June 14, 2021, ordered that the murder trial of the multimillionaire real estate heir will continue, despite defense requests for a delay because he’s in too much pain. Durst’s lawyers argued that he was in such pain from a urinary tract infection and other undiagnosed issues that he couldn’t even stand up to to dress for court. (AP Photo/Alex Gallardo, Pool, File)

A pale, thin Robert Durst, 78, with a shaven head that reveals a massive scar from removing fluid on his brain, was seated in a wheelchair and dressed in baggy brown jail scrubs.

Durst, who has bladder cancer and several other maladies, stood up and addressed the judge to counter a suggestion by Deputy District Attorney John Lewin that he was seeking sympathy from jurors by displaying his urine bag.

Durst said his head was shaved only because it was the only haircut he could get in jail. He said he wants a doctor to remove a catheter.
“I am not seeking sympathy from the jury,” Durst said in a throaty voice before his brother was called to testify.

Douglas Durst said his brother’s trials have tarnished the reputation of his family.

“It’s the most embarrassing thing that I’ve ever encountered,” he said. “It’s very painful to have our names associated with these incidents.”

Durst said the last time he spoke with his brother was in 1999 and he had last seen him in Texas at a nephew’s wedding in 2001.

About two weeks after the wedding, Robert Durst fatally shot neighbor Morris Black in Galveston, where he had gone to hide out from New York authorities after they reopened the investigation into Kathie Durst’s disappearance.

Durst was acquitted of murder in the case after testifying he killed Black in self-defense. He served jail time for chopping up Black’s body and tossing it out to sea and for jumping bail in the case.

While he was on the lam in that case, he showed up outside his brother’s Westchester home, Douglas Durst said he learned.

Durst was later recorded on a jail phone call “in essence plotting to kill his brother, Douglas,” Lewin said in arguing that jurors should hear about Durst showing up outside his brother’s home.

“He has compared the way he feels about Douglas to the way he felt about Kathie,” Lewin said. “Our argument and position is that is what he did, he killed her.”

Robert Durst twice showed up outside his brother’s house in 2008, including once when he was wearing a ski mask and fled after a security guard drew his weapon, Lewin said.

Douglas Durst said that even as his brother is being held without bail, he still is concerned about his safety and had flown to California with a security detail.

“I have a fear that my brother has threatened to kill me and I fear that he may have the means to do so,” he said.