NEW ORLEANS (AP) — A former Louisiana sheriff was sentenced Wednesday to 10 years in prison for a federal bribery conviction, to be served at the same as his four life sentences for earlier convictions for raping boys. 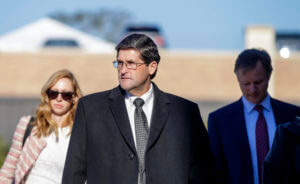 FILE – Former St. Tammany Parish Sheriff Jack Strain, center, walks into the parish courthouse before the start of closing arguments in his trial on multiple counts of sex crimes in Covington, La., on Nov. 8, 2021. The former Louisiana sheriff has been sentenced to 10 years in prison on a federal bribery conviction. The sentence was imposed Wednesday, April 6, 2022, on Strain and is to be served concurrently with his four life sentences on recent state convictions for raping boys. (David Grunfeld/The Advocate via AP, File)

Strain pleaded guilty to one of 16 federal charges against him on Dec. 1, 2021, and prosecutors dropped the others.

The plea came weeks after a St. Tammany Parish jury convicted Strain on eight charges including four counts of aggravated rape against children less than 13 years old — a crime which carries an automatic life sentence.

Strain, who served five terms before losing the 2015 election, admitted using his authority as sheriff to steer profits from a $1 million work-release contract to himself, his family and two of his top deputies.

His sworn statement in federal court said he hid the deputies’ involvement in the scheme.

One man who pleaded guilty in the federal case told the state court jury that Strain molested him when he was a child, gave him a job when he was deeply in debt and later pressured him to join the work-release scheme.

Strain was sentenced in February on the state charges. Judge Bruce A. Simpson added 30 years for crimes against two of Strain’s relatives and ordered him to pay $30,000 in fines and nearly $28,000 for the costs of his prosecution, news agencies reported.