AKRON, Ohio (WEWS) — The mother and father of 17-year-old Ethan Liming, a rising senior at Firestone Community Learning Center, said their son was a good person who loved helping others, and that he did not deserve to be beaten to death near the basketball courts of the I PROMISE School in Akron last week.

On the night of June 2, Liming died from blunt force trauma received during a brutal beating at the hands of a group of three males who were playing basketball and engaged Liming and his friends in a fight, Akron police said.

Now a week later, in an emotional interview, the teen’s mother and father spoke to WEWS-TV about their son’s death while police search for those responsible.

“Ethan was everything. He was a good boy. He was a smart boy. He loved life. He loved living life. He wanted to be friends with everybody,” said Ethan’s mother Jennifer Liming. “What happened to him? He did not deserve to die like that. It’s just unfathomable. Every day— wake up and can’t believe it’s real. I can’t believe it happened to him. I just hope that somebody knows something, they speak up and please say something, because my son didn’t deserve to die like this. Please help us find these people. Have justice for Ethan, and so this doesn’t happen to any other child or anybody else, and no other family has to go through this. I just miss him so much. And I just wish he was here.”

Police said that based on preliminary information, Ethan was with a group of friends who pulled into the school parking lot. After arriving, Ethan and his friends arrived at the basketball courts and were participating in some sort of horseplay, which may have triggered the response from the other group of three males who were already on the property playing basketball to engage them in a fight, police said.

“We were told that the males on the basketball court were playing basketball recreationally, so not seemingly bothering anyone at least at that point,” Lt. Michael Miller said in an interview with WEWS-TV. “The victim [Liming] and/or the group that was with him – there a total of four inside the vehicle that they arrived in. And again, whether the suspect half-approached the car or members inside the car got out, but we do know in short order that…a fight ensued. And during that fight, the victim [Liming] was grounded – knocked to the ground – and then those significant injuries, etc. happened.” 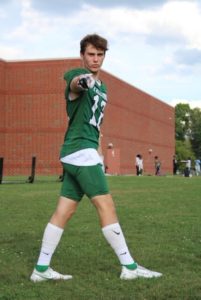 Bill Liming, Ethan’s father and a reverend, said he has spoken to the lead detective on the case. He gave new details on how the fight allegedly began.

“Teenagers were being teenagers, and I don’t want to say too much about the investigation,” Bill Liming said. “But apparently, some of his friends who were with him were fooling around in the parking lot, and some other people didn’t like it, and they went running back to Ethan’s car where he and his other friend were.”

Liming went on to describe how the fight escalated to a deadly encounter for his son.

“Ethan still thought it was horseplay when he got out of the car and was trying to tell people, ‘It’s relaxed. It’s just a joke. It’s a joke.’ And the individuals didn’t like that,” Liming said. “One individual attacked him. Ethan still tried to tell them it’s just a joke. And then another individual came up behind them, struck him in the head. He was fighting back for his life. The detective told me that, ‘Your son fought for his life.’ It was not over like it was like a single punch, he fell down and hit his head. That’s not what happened…he was fighting for his life. And then a third individual came up behind him and they overwhelmed them and they knocked him out on the ground.”

Liming said that contrary to what is being said about them, Ethan’s friends stayed and did what they could to help him after he was assaulted.

“It’s been said that they abandoned Ethan and it’s not true,” Bill Liming said. “They did everything they possibly could to help Ethan. They called 911 to get help. And when Ethan was knocked out on the ground, his two African-American friends tried to pick up his body and put them in the car, to help save his life. He was still alive at that point. He was still breathing.”

Bill Liming said the group that assaulted their son “didn’t like that,” and forced Ethan’s friend’s away, physically assaulting another child there.

“His friends tried to help him and they drove them away eventually — not before calling 911. They called, they tried to get help for him,” Liming said. “And when they couldn’t catch the one child that ran across a parking lot, they came back and finished my son off.”

“They, as I said, they called for help for my son, but the help did not arrive in time, and they did the best they could to help him when they were there, and it’s just — my heart’s broken.”

Akron Police released more details Wednesday about the moments that led up to the deadly beating. Police have not released detailed descriptions of suspects. WEWS-TV was told that video from outside of I PROMISE school did not clearly capture the attack or images of the suspects, leading Bill Liming to raise concerns about the security cameras.

WEWS-TV has reached out to the LeBron James Family Foundation for a response to Liming’s statement about the safety of the school’s campus but has yet to hear back as of Tuesday evening. Akron Public Schools declined to make any comment about the safety concerns raised by Liming.

Both Bill and Jennifer are pleading for someone in the community to come forward. A reward of up to $5,000 is being offered by Summit County Crimestoppers for information. 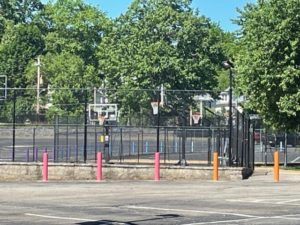 Basketball courts at I PROMISE Schools in Akron. (WEWS)

“It’s important to say something, please, this violence can’t stop unless people start talking, it’s just going to keep going until people say something and speak out,” Jennifer Liming said. “We have to be a voice, we have to be heard. We have to stop it. It’s just getting worse. Every day you hear more and more things happening and people, don’t be afraid to talk together. We’re here we need to be more united. These kids are suffering here with this that happened to Ethan. I hear from the principal I hear from coaches, how much anguish they’re in and I just want parents of these kids — make sure you’re getting help for your kids, that they can talk to somebody. Ethan wouldn’t want them to carry this and be hurting like this. He would want them to be able to go on and be happy and live their life.”

When asked if she had a message for those responsible for her son’s death, Liming fought back tears as she delivered an emotional plea to her son’s alleged killers.

This story was originally published June 7 by WEWS in Cleveland, an E.W. Scripps Company.