BRIDGEPORT, Conn. (AP) — The death of a Connecticut woman while on a date with a man she met online was caused by drugs and alcohol and has been ruled an accident, the state chief medical examiner’s office said.

The family of the 23-year-old woman, Lauren Smith-Fields, had complained authorities were not giving the investigation enough attention because she was Black.

Smith-Fields died Dec. 12 from “acute intoxication due to the combined effects of fentanyl, promethazine, hydroxyzine and alcohol” and her death was accidental, the medical examiner’s office said Monday. Fentanyl is a powerful opioid. Promethazine and hydroxyzine are antihistamines used to treat allergies.

She was found in her Bridgeport apartment after the man she was with called police to say he awoke to find her unresponsive.

Smith-Field’s family said police never notified them of her death, which they learned about more than a day later through a note left on her apartment door by her landlord. A detective eventually asked them to stop calling, they said. The family’s attorney, Darnell Crosland, has notified the city of his intent to file a lawsuit accusing police of failing to properly investigate. 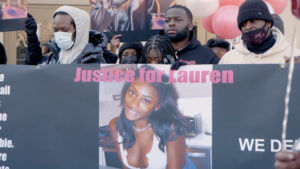 Family and friends of Lauren Smith-Fields gathered for a protest march in her memory in Bridgeport, Conn. Jan. 23, 2022. Smith-Fields was found dead in her Bridgeport apartment in December and her family and friends marched in her memory on Sunday, which would have been her 24th birthday. The death of the Black women has her family and the community asking questions about policing, race and victims rights. (Newsy)

“The police department has been racially insensitive to this family and has treated this family with no respect and has violated their civil rights,” Crosland wrote in the intent to sue notice.

Crosland posted a statement on Twitter late Monday questioning the medical examiner’s finding that Smith-Fields’ death was an accident. A message seeking comment was left Tuesday for Crosland.

Dr. James Gill, the chief medical examiner, said Tuesday in an email to The Associated Press that he could not discuss specifics of the case because his office is only allowed to release information on death certificates.

Mayor Joe Ganim said Monday the police department’s internal affairs office is investigating the agency’s response to Smith-Fields’ death and he is working with the police chief to change department practices for notifying family members of a death.

“Sensitivity and care is of utmost importance when working with the family of a victim,” Ganim said in a statement. “There is no tolerance for anything less than respect and sensitivity for family members and their loss.”