WEST PALM BEACH, Fla. (WPTV)— The family of a 79-year-old woman who fell to her death while attempting to cross a Florida drawbridge is suing the bridge tender and the company that manages the bridge.

According to a lawsuit filed Monday in Palm Beach County court, the family of Carol Wright is seeking monetary damages and “to enact change to preclude this preventable tragedy from occurring in the future.”

Wright fell about 40 feet to her death last month as the drawbridge span opened while was walking across it with her bicycle.

Police claim surveillance video contradicts her statement that she walked out onto the balcony of the bridge tender’s booth to check for vehicles and pedestrians before opening it. 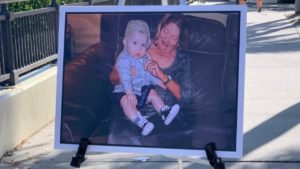 A poster board shows an enlarged photograph of Carol Wright, 79, who fell to her death off the Royal Park Bridge in West Park Beach on Feb. 6, 2022. (WPTV)

“Bridges are always covered in pedestrians especially in Palm Beach County, and for them to have gotten away with just one death, I considered them lucky,” Wright’s niece, Jill Sanchez, said during a Monday morning news conference. “There could have been four of five people on that bridge at the same time. We’re not lucky. We have a huge loss.”

Mike Piscitelli, a lawyer representing Florida Drawbridges Inc., which operates the bridge that connects West Palm Beach to Palm Beach, provided WPTV with a statement on behalf of the company.

“Today, Florida Drawbridges Inc. received the complaint filed on behalf of Carol Wright and is reviewing the allegations. Ms. Wright’s death was tragic; however, the company performs over 25,000 openings a month and has the appropriate safe operating procedures in place.

In relation to employment issues, the company uses multiple platforms to identify candidates for employment. All candidates are individually interviewed, E-verified and must past a drug test and job specific physical. All tenders must past a written test, bridge specific operating test and requalify annually. All tenders have a dedicated area specific supervisor for quality assurance.”

This story was originally published March 28, 2022, by WPTV in West Palm Beach, an E.W. Scripps Company.