LAS VEGAS  — The mother accused of killing her two young children in their Nevada home was employed by Family Services in Clark County, a local child welfare agency that works to protect children from abuse and neglect.

A county spokesperson confirmed that 33-year-old Jovan Trevino was a Family Services Assistant, a role in which she generally completed paperwork, helped families apply for assistance, assisted with transportation, monitored visitations and performed other duties.

Trevino is accused of drowning her 1-year-old daughter and 4-year-old son in separate bathtubs in their home near Galleria Drive and Gibson Road earlier this week. 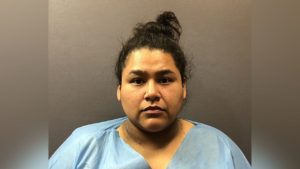 The dead children were discovered by their father, who was not living in the home. He told police he stopped by because something didn’t seem right. The children were found in separate bathtubs and it appears they were drowned.

During the investigation, police found Trevino’s unlocked phone with what appeared to be a suicide note saying she could not “walk off this earth and leave my precious children behind.”

They also found a large knife and a towel with what appeared to be blood on it in the master bedroom.

While at the scene, detectives received a call from Henderson police who said that Trevino had walked into the emergency room at Western Regional Arizona Medical Center in Bullhead City, Arizona, and told staff that she had killed her two children.

Trevino reportedly told them that she decided to kill herself Sunday. She said she didn’t know at first if she was just going to kill herself or herself and the children.

She told police she knew her kids could not live without her and on Monday morning she decided to kill the children and herself.

Trevino told police she took a large amount of Allegra, drank Theraflu and three beers and took a shot of tequila before killing the children.

Afterwards, she reportedly tried to kill herself, but it did not work. She then decided to pack alcoholic beverages into her car and planned to park somewhere and let the heat kill her or drive head-on into another vehicle. Ultimately, she went to the medical center.

Trevino, who is facing two murder charges, will be extradited to Clark County.

This story was originally published July 22, 2021 by KTNV in Las Vegas.