EPHRAIM, Utah (KSTU) — The parents of a missing Snow College student who was found alive Saturday night expressed their gratitude for everyone who helped bring their daughter home.

Snow College Police Chief Derek Walk announced Sunday afternoon that they had arrested a suspect in connection with the disappearance of the 19-year-old. 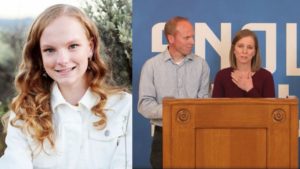 She was checked out at a local hospital after she was found, and has since been reunited with her family.

The victim’s uncle, Jacob Allen, who has taken the role of family spokesperson throughout the past week, gave a statement from the family following the police chief’s announcement.

He said even their own family is still learning about and coming to terms with what happened.

“The ordeal that she has been through is dangerous and traumatic. The experience and details and effects of which we’ve only begun to understand,” Jacob said. “She is a fighter. She is now a survivor.”

Jacob said the family is going through an intense mix of emotions — shocked, exhausted, relieved, worried, but most of all: thankful.

Family members especially thanked the police and others involved in the investigation that brought their loved one back to them.

“We got the phone and [Chief Derek Walk] called as he’s done many times,” said Jonathan, the victim’s father. “‘He said ‘I have her,’ and we dropped to our knees. We were so grateful. Elated.”

“We are so grateful that we can continue our lives together with her,” added Taunya Allen, the victim’s mother. “And it took the effort of so many and we’re so grateful.”

Prior to the victim being found, her family and friends organized two simultaneous vigils for Sunday evening at 6 p.m. One will be held at the Noyes Building at Snow College, and the other will be at Angel Street Park in Kaysville (her hometown). The family said they will still hold these vigils but will focus on gratitude rather than hope that she’s found. More information on the events can be found on Facebook.

HAPPENING NOW: A “vigil of gratitude” is taking place here at @SnowCollege as family, friends and classmates of Maddie Allen breathe a sigh of relief knowing she was found alive last night.

A similar gathering is also taking place in Kaysville. pic.twitter.com/dI9zZ4kdCp

This story was originally published Dec. 20, 2021, by KSTU in Salt Lake City, an E.W. Scripps Company.