TAMPA (WFTS) — A father is facing a first-degree murder charge after authorities said he shot and killed his 5-year-old daughter and also shot his 8-year-old son in Tampa on Monday night.

According to the Hillsborough County Sheriff’s Office, the 5-year-old was pronounced dead after she was taken to Tampa General Hospital, and the 8-year-old boy is in critical condition after he underwent surgery overnight. 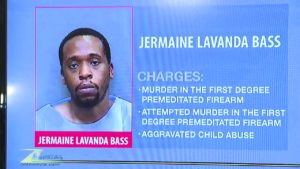 Jermaine Bass is facing a first-degree murder charge after authorities say he shot and killed his 5-year-old daughter and also shot his 8-year-old son in Tampa on Monday night. (Hillsborough County Sheriff’s Office via WFTS)

The shooting happened at the Armature Gate Townhomes around 10:30 p.m.

Chronister said both of the children were shot multiple times in the head. When deputies and first responders arrived at the scene, Chronister said Bass claimed the shooting was an accident.

He did not provide any further comment after his arrest, according to Chronister.

“You don’t accidentally shoot your children three to four times in the head,” Chronister said.

Chronister said the mother of the children was out for dinner Monday night and was “making every effort” she could to get home before the two children went to bed. He said she returned home and said goodnight to the kids, who shared a bunk bed.

After she kissed them goodnight, Chronister said she left them with Bass, her husband, and went to use the restroom. While in the restroom, she heard several gunshots, which she initially believed happened right outside their home.

Shortly after, Chronister said she realized they were “too close,” and she ran outside in fear of her own life. Outside the home, she came across a neighbor who also heard the shots and was already on the phone with 911.

Chronister said she took over the phone call, and at that time, Bass carried the 8-year-old victim outside and repeatedly said, “call for help.”

Deputies and first responders were at the scene a short time later. Chronister said they found Bass in the family room cradling the 8-year-old while he said, “it was an accident.” 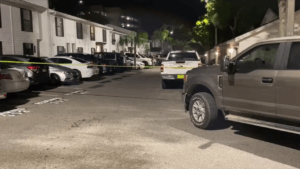 Jermaine Bass is facing a first-degree murder charge after authorities say he shot and killed his 5-year-old daughter and also shot his 8-year-old son in Tampa on Monday night. (WFTS)

First responders began to work on the 8-year-old boy and began to prepare him to be transferred to the hospital. At that time, Chronister said authorities asked if anyone else was in the home, and Bass said the 5-year-old was asleep in her bed.

Deputies went upstairs, where Chronister said they made the “gruesome” discovery of the young girl laying in a pool of blood in her bed with two to three gunshot wounds to the head.

Paramedics began life-saving measures on the 5-year-old and then rushed both of the children to Tampa General, where the 5-year-old was pronounced dead.

The 8-year-old boy is fighting for his life at the hospital after he underwent surgery Monday night.

“We as a sheriff’s office are struggling today,” Chronister said. He added that the sheriff’s office is going to bring counselors in for the deputies who responded to the scene to “try to get them through this.”

“I hope that this individual feels the full weight of the criminal justice system and never sees the light of day where he can ever be in a position to harm another human being,” the sheriff added.

Chronister said authorities continue to talk with the mother.

He also said there were no previous calls for service at the home, and Bass has no previous criminal history.

This story was originally published Aug. 30 by WFTS in Tampa, an E.W. Scripps Company.