BEDFORD HEIGHTS, Ohio (WEWS) — A 29-year-old mother accused of stabbing her 5-year-old daughter to death is being held on a $2 million bond in Cuyahoga County Jail after she was indicted by a grand jury earlier this week.

The defendant, Menokka Nealy, of Bedford Heights, is charged with two counts of aggravated murder, three counts of murder, two counts of felonious assault, and one count of endangering children, according to Cuyahoga County Court of Common Pleas records. All of the charges are felonies. 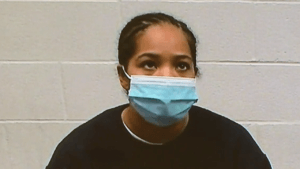 The public defender asked for a reasonable bond and pleaded not guilty on behalf of Nealy.

After Nealy’s court-appointed lawyer addressed the judge, a man who was identified himself as the victim’s father, asked the judge for the highest bond possible.

“Is there any way possible to make her bond the highest possible so this never happens ever again?” asked Gregory Holland. “The system failed me. I was fighting for my daughter. Let me down and I don’t want this to happen to nobody else. She should never see the day of light ever again. Ever.”

The judge ordered Nealy to undergo a mental health reintegration plan. Nealy’s case will be tried in the courtroom of Judge Nancy Margaret Russo.

She was arrested on Feb. 12 after police responded to an apartment in the 5300 block of Northfield Road to conduct a welfare check on the child.

According to police, officers found the child lying on the floor. The child had been stabbed repeatedly and was pronounced dead at the scene.

Police said the mother claimed responsibility for the attack but didn’t give a reason why it happened.

This story was originally published March 3, by WEWS in Cleveland, an E.W. Scripps Company.