ST. PETERSBURG, Fla. (AP) — The FBI on Thursday identified human remains found in a Florida nature preserve as those of Brian Laundrie, a person of interest in the death of girlfriend Gabby Petito while the couple was on a cross-country road trip.

The remains, a backpack and notebook believed to belong to Laundrie were discovered Wednesday in a Florida wilderness park, according to the FBI. The area where they were found had been under water during earlier searches.

The FBI’s Denver office said in a news release that a comparison of dental records confirmed that the remains were Laundrie.

The discovery of the remains concluded a massive search involving federal, state and local law enforcement that began shortly after Laundrie disappeared Sept. 14, two weeks after the 23-year-old returned alone to his parents’ home in North Port, Florida. 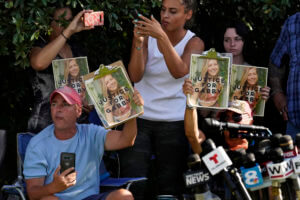 FILE – In this Wednesday, Oct. 20, 2021, file photo, Supporters of Gabby Petito hold up photos of Gabby after a news conference Wednesday, Oct. 20, 2021, in North Port, Fla. The FBI on Thursday, Oct. 21, 2021 identified human remains found in a Florida nature preserve as those of Brian Laundrie, a person of interest in the death of girlfriend Gabby Petito while the couple was on a cross-country road trip. (AP Photo/Chris O’Meara, File)

Petito’s family reported her missing Sept. 11, launching a search that garnered worldwide media attention and focused largely on the Carlton Reserve wilderness park near the Laundrie home. It is a densely wooded, swampy area that’s home to alligators, coyotes, bobcats, snakes and numerous other creatures.

The intense focus on Petito’s case has led to renewed calls for people to pay greater attention to cases involving missing Indigenous women and other people of color.

The body of Petitio, 22, was found Sept. 19 on the edge of Wyoming’s Grand Teton National Park, which the couple had visited. The coroner there concluded she died of strangulation and her body had been where it was found for three or four weeks.

The couple was stopped Aug. 12 by police in Moab, Utah, after they had a physical altercation, but no charges were filed.

Laundrie returned home alone Sept. 1 in the Ford van the couple took on their trip. He was reported missing after telling his parents that he was going for a hike in the Carlton Reserve, a nature preserve that was a key area in the search.

The activity Wednesday focused on the nearby Myakkahatchee Creek Environmental Park, where a Ford Mustang that Laundrie drove to the wilderness was found.

Laundrie was charged in a federal Wyoming indictment with unauthorized use of a debit card, which alleged Laundrie used a Capital One Bank card and someone’s personal identification number to make unauthorized withdrawals or charges worth more than $1,000. It does not say to whom the card belonged or what type of charges were made.