OKLAHOMA CITY (AP) — A federal appeals court granted stays of execution on Wednesday for two Oklahoma inmates who were scheduled to receive lethal injections in the coming weeks.

A three-member panel of the 10th U.S. Circuit Court of Appeals issued the stays for death row inmates John Marion Grant, who was scheduled to die on Thursday, and Julius Jones, whose lethal injection was set for Nov. 18. 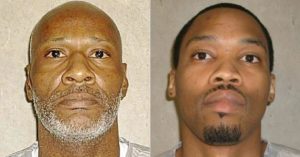 The court ruled that U.S. District Judge Stephen Friot in Oklahoma erred when he removed Grant, Jones and three other inmates from a lawsuit challenging the state’s lethal injection protocols because they did not designate an alternative method of execution.

The court determined that the inmates did identify alternative methods in their complaint, even if they didn’t specifically check a box designating which specific method they would use.

The panel wrote, “We find nothing in the relevant case law that specifically requires a prisoner to designate a method of execution to be used in his case by ‘checking a box’ when the prisoner has already identified in his complaint the very same alternative methods given as choices on the form.”

Dale Baich, an attorney for some of the death row inmates, said the court made the right decision.

“Today’s order should prevent the state from carrying out executions until the federal district court addresses the ‘credible expert criticism’ it identified in Oklahoma’s execution procedures,” Baich said in a statement. “Those issues will be carefully reviewed by the court at the trial scheduled in February.”

“We are hopeful the Supreme Court will vacate the stay so that justice can finally be served for the people of Oklahoma, including the families of the victims of these horrific crimes,” O’Connor said in a written statement.

O’Connor had pushed for seven executions to be scheduled through March, and prison officials announced this week that they have confirmed a source to supply all the drugs needed for those executions.

“Extensive validations and redundancies have been implemented since the last execution in order to ensure that the process works as intended,” the Department of Corrections said in a statement.

Oklahoma has historically had one of the nation’s busiest death chambers, but a series of problematic lethal injections in 2014 and 2015 led to a de facto moratorium. Richard Glossip was just hours away from being executed in September 2015 when prison officials realized they received the wrong lethal drug. It was later learned that the same wrong drug had been used in a January 2015 execution.

While the moratorium was in place, Oklahoma moved ahead with plans to use nitrogen gas to execute inmates, but ultimately scrapped that idea and announced last year it planned to resume executions using the same three-drug lethal injection protocol that was used during the flawed executions. The three drugs are midazolam, a sedative; vecuronium bromide, a paralytic; and potassium chloride, which stops the heart.