LOUISVILLE, Ky. (AP) — The federal government filed civil rights charges Thursday against four Louisville police officers over the drug raid that led to the death of Breonna Taylor, a Black woman whose fatal shooting helped fuel the racial justice protests that rocked the nation in 2020.

The charges are another effort to hold law enforcement accountable for the killing of the 26-year-old medical worker after one of the officers was acquitted of state charges earlier this year.

“Breonna Taylor should be alive today,” Attorney General Merrick Garland said in announcing the charges, which include unlawful conspiracy, use of force and obstruction of justice.

The charges named former officers Joshua Jaynes and Brett Hankison, along with current officers Kelly Goodlett and Sgt. Kyle Meany. Most of the charges stem from the faulty drug warrant used to search Taylor’s home.

Hankison was the only officer charged Thursday who was on the scene that night. Louisville police said they are seeking to fire Goodlett and Meany.

Taylor was shot to death by officers who knocked down her door while executing a search warrant. Taylor’s boyfriend fired a shot that hit one of the officers as they came through the door, and they returned fire, striking Taylor multiple times. 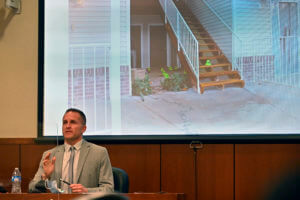 Former Louisville Police officer Brett Hankison is questioned by prosecution as he discusses his position during the attempted execution of a search warrant in Louisville, Kentucky, Wednesday, March 2, 2022. (AP Photo/Timothy D. Easley, Pool)

Taylor’s mother, Tamika Palmer, said she has waited nearly 2 1/2 years for police to be held accountable.

“Today’s overdue, but it still hurts,” she said. “You all (are) learning today that we’re not crazy.”

The Justice Department is also conducting a non-criminal investigation of the Louisville Police Department, announced last year, that is probing whether the department has a pattern of using excessive force and conducting unreasonable search and seizures.

In the protests of 2020, Taylor’s name was often shouted along with George Floyd, who was killed less than three months after Taylor by a Minneapolis police officer in a videotaped encounter that shocked the nation.

Protesters who took to the streets over months in Louisville were especially critical of Kentucky Attorney General Daniel Cameron, who presented only wanton endangerment charges against Hankison for a grand jury to consider in 2020. Members of the grand jury later came forward to complain that Cameron’s office had steered them away from charges for the other officers involved in the raid.

“Thank God that Kentucky Attorney General Daniel Cameron did not get the last word in regard to justice for Breonna Taylor,” Crump said Thursday. “We have always said this was a conspiracy to cover up the death of Breonna Taylor. Today the Justice Department put forth the charging documents to show we weren’t crazy.”

Cameron, a Republican running for governor next year, said in announcing the indictment against Hankison in September 2020 that he would leave “issues regarding potential civil rights violations” to federal officials to investigate. Cameron had not responded to a request for comment Thursday afternoon.

Garland said the officers who were at Taylor’s home just after midnight on March 13, 2020, “were not involved in the drafting of the warrant, and were unaware of the false and misleading statements.”

Hankison was indicted on two deprivation-of-rights charges alleging he used excessive force when he retreated from Taylor’s door, turned a corner and fired 10 shots into the side of her two-bedroom apartment. Bullets flew into a neighbor’s apartment, nearly striking one man. 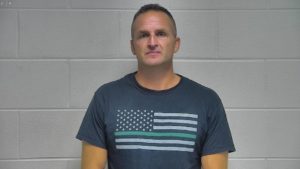 He was acquitted by a jury of state charges earlier this year in Louisville.

A separate indictment said Jaynes and Meany both knew the warrant used to search Taylor’s home had information that was “false, misleading and out of date.” Both are charged with conspiracy and deprivation of rights.

Meany ran a police unit that focused on aggressive drug investigations. Police served five warrants simultaneously the night of the Taylor raid, four of them in a concentrated area where drug activity was suspected, and the fifth at Taylor’s apartment nearly 10 miles (16 kilometers) away.

The warrant for Taylor’s house alleged that she was receiving packages for a suspected drug dealer who was a former boyfriend. The warrant, signed by Jaynes and approved by Meany, said Jaynes had confirmed with the postal service that packages for the ex-boyfriend, Jamarcus Glover, were going to Taylor’s apartment. Investigators later learned that Jaynes had not confirmed that with the postal inspector.

Jaynes was fired in January 2021 for violating department standards in the preparation of a search warrant execution and for being “untruthful” in the Taylor warrant.

Jaynes and Goodlett allegedly conspired to falsify an investigative document that was written after Taylor’s death, Garland said. Federal investigators also allege that Meany, who testified at Hankison’s trial, lied to the FBI during its investigation. 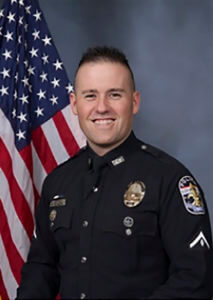 FILE – In this file photo, date not known, released by the Louisville (Ky.) police is Louisville Police Det. Joshua Jaynes, an officer fired Jan. 6, 2021. The federal government filed civil rights charges Thursday, Aug. 4, 2022 against four Louisville police officers over the drug raid that led to the death of Breonna Taylor, a Black woman whose fatal shooting helped fuel the racial justice protests that rocked the nation in 2020. (Louisville Police via AP)

Garland alleged that Jaynes and Goodlett met in a garage in May 2020 “where they agreed to tell investigators a false story.”

Former Louisville Police Sgt. John Mattingly, who was shot at Taylor’s door, retired last year. Another officer, Myles Cosgrove, who investigators said fired the shot that killed Taylor, was dismissed from the department in January 2021. Taylor’s boyfriend, Kenny Walker, who was in her apartment that night and fired the shot at Mattingly, was initially charged with attempted murder of a police officer but that charge was dropped after Walker told investigators he thought an intruder was breaking into the apartment.

The Taylor case also prompted a review of the city’s “no-knock” warrant policy. Officers at Taylor’s door said they knocked and announced they were police even though the warrant didn’t require that. Those types of warrants, used in drug investigations to attempt to prevent the destruction of evidence, were later banned in the city of Louisville. 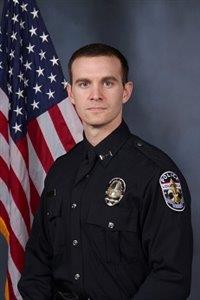