In a surprise twist earlier in the day, Absher took the stand in his own defense and vehemently denied shooting either sister.

Absher had also faced a charge of possession of a firearm by a felon, and after the jury began deliberations Thursday, he changed his plea to guilty for just that one charge.

Back in 2017, Absher, now 38, was arrested after a citywide manhunt in Jacksonville following the Halloween shootings that took place after an altercation in the couple’s second-story condo.

Absher’s ex-girlfriend, Ashlee Rucker, was shot in the head and died just feet away from her sister, Lisa Rucker, and two children, Lisa’s 4-year-old son and Ashlee’s 9-year-old son.

Lisa Rucker, who survived a bone-shattering bullet to the face, testified against Absher. She spoke openly with the press throughout the investigation. Only weeks after having undergone eight hours of reconstructive surgery, Rucker told First Coast News that her sister had been abused for years by the defendant prior to the incident. Court documents confirmed Absher, who was already a convicted felon, also had multiple prior acts of violence against his ex-girlfriend. 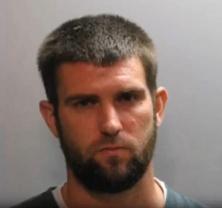 The state began their opening statement with words from Ashlee’s now 14-year-old son from the night his mom was killed.

The state’s lead prosecutor, Cameron French, went on to describe how the boy ran to get his Aunt Lisa in another bedroom to help after seeing his mom fighting with the defendant, who they called “Tee.”

Prosecutors say Absher used a 9mm gun to shoot Lisa in the cheek while she was cleaning blood off the floor from the fight that had ensued shortly before the shootings. He then turned the gun on Ashlee before fleeing the scene.

Lisa was rushed to UF Health Shands hospital where she underwent reconstructive surgery. Ashlee died on the couple’s condo floor.

The defense painted a much different version of the facts, claiming Absher was acting in self-defense and pointed out the defendant’s missing tooth that he lost during the fight that night.