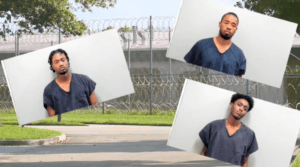 Authorities said when the trio arrived at the unidentified victim’s home on Sandia Drive in Port St. Lucie, they robbed and assaulted the victim and demanded he hand over the large amounts of cash he boasted about.

According to the sheriff’s office, for nearly two days they moved from various locations before the suspect was kidnapped and forced to drive to a location that required them to travel through Martin County.

During that time, deputies said, the sheriff’s office traveling criminal response team was on patrol monitoring the highways.

The victim, who was driving the vehicle, intentionally committed a traffic violation and was pulled over by deputies.

Deputies said the victim who was afraid to say he was being kidnapped, had a look of despair when the deputy gave him a warning and started to send him on his way with a warning.

“At that time, all the passengers had gotten back in the car and the driver kind of hung out, which is unusual,” Deputy Cameron White said.

White said what also caught his attention was the driver stuck around. After being told for a second time he could leave, the driver finally turned away.

“But as he was walking away and he put his hands behind his back and he made a gesture like he was shooting a handgun facing down, and that made the hair on my neck stand up,” he said.

The Port St. Lucie Police Department was called in to assist and, after hearing the victim’s story and confirming the kidnapping, the suspects were placed into custody.

“We’re like, ‘Hey, what was that all about?'” White said. “He said, ‘These guys in the car are holding me hostage. There are guns in the car, and I need help.'”

Deputies were able to locate guns, knives and large amounts of cash inside the vehicle.

The three suspects were arrested on various charges, including unlicensed carry of a firearm, possession of a controlled substance and providing a false name. The trio also face charges of kidnapping, assault, home invasion, false imprisonment and witness tampering.

Deputies said the men claimed they are part of a group called the Israelites and only wanted to come to Florida to hang out with some “b—-es.”

This story was originally published June 17 by WPTV in West Palm Beach, an E.W. Scripps Company.